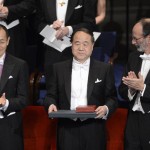 I’ll leave the parsing to others, but here’s the body of Mo Yan’s meticulously arranged speech at the Nobel Prize Award Ceremony last night: I am well aware that there are many writers in the world who would be more worthy Laureates than I. I am convinced that if they only continue to write, if... Read more » 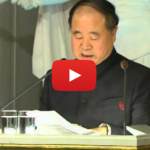 Mo Yan gave his traditional Nobel lecture, "Storytellers," about 10 hours ago at the Royal Swedish Academy in Stockholm. He was introduced by Kjell Espmark, member of the Nobel literature committee. Mo's 32-minute talk has already been translated by the preeminent Howard Goldblatt, here, which you should take a minute to read before letting the news media inundate the conversation with all their cherry-picked selections that fit their narrative. 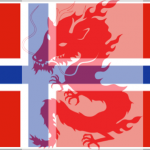 The Norwegian government is only marginally responsible for the Nobel Peace Prize — its parliament appoints the five-person selection committee — but you wouldn’t know it judging by China’s durian-sized grudge, with spikes of everlasting disdain. Quick recap: in 2010, while serving his fourth prison term, Liu Xiaobo was awarded the Nobel Peace Prize despite... Read more » 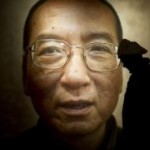 On Tuesday, 134 Nobel laureates wrote to Xi Jinping asking him to release 2010 Nobel Peace Prize laureate Liu Xiaobo, currently serving an 11-year sentence for subversion (etc.) after he coauthored “Charter 08,” a manifesto calling for greater freedoms in China. His wife is also currently under house arrest. The decision is probably not Xi Jinping’s... Read more » 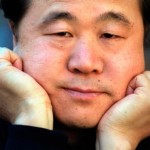 The blitz is on. Eighteen hours after Mo Yan’s historic win of the Nobel Prize in Literature, a shedload of articles have appeared analyzing, praising, criticizing, and explaining what it all means to China, the Nobel Committee, literature, politics, activism, free speech, publishing, Ai Weiwei, and the world. If you’re looking for a straight write-up,... Read more » 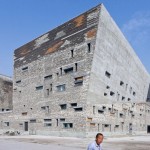