We know laowai song-and-dance videos are passe — thanks, Jesse Appell, et al. — but the effort in this latest one is simply too rich to ignore. Matt Sheehan — who you recognize around these parts as the China Eastern airport rumble writer — teamed up with his friend Matt Allen to write, direct, shoot, and produce “We Livin in Xi’an,” and the result is a perfectly outlandlish little paean to the capital of Shaanxi province, and perhaps the foreigner experience in China.

The rap group name is “The 党 Dynasty” (that character is dang, Party), made up of Bro西来 (Allen) and 他马特老外 (Sheehan). For most of the video, the two Matts are wearing Xi’an Gaoxin Number 1 middle school uniforms.

There’s not much more we can say except whatever sound a shaking head makes. The full lyrics to the song are below. The rhythm and beat is inspired by Dead Prez’s “Hip Hop.” Enjoy these scenes of Xi’an. 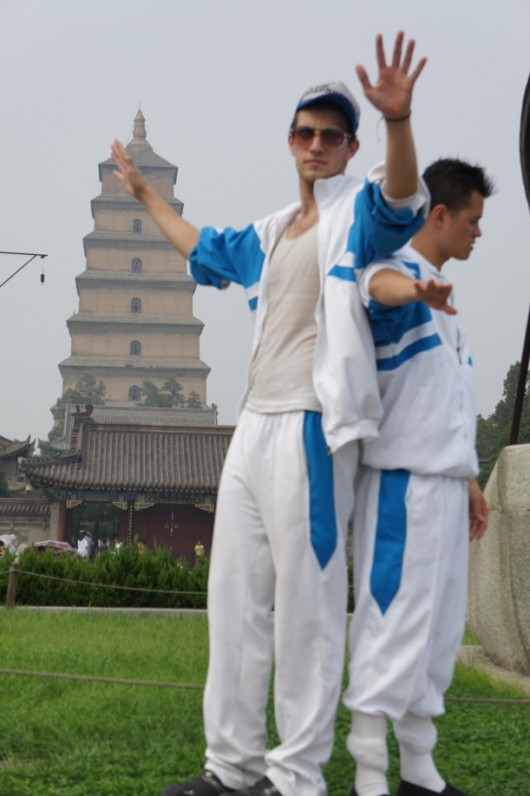 We livin in XI-AN, XI-AN, XI-AN……
Thing bout Xi’an, when you first step off that train,
cars be swervin out they lanes,
but we ready for that, we game.

And we hittin’em back,
two 老外 headin the pack,
matta fact we got the buns,
now where my 老外 at who’d rather observe than interact?

If you check 1-2 my word of advice to you,
is learn the tongue,
just say what you got to say,
if that don’t work then just play dumb.

If you a bus or cab driver, noodle grinder, scooter rider,
or you gotta hand out flyers,
then just own it,
but then if you a baijiu sippin, restaraunt spitting,
belly itchin, Gucci wearin bitch,
I’ma know it when i see it,

Who drivin this cab?
if he don’t slow down he gon’ kill us all
在西安堵车越来越多

我给你说所以老外听好,
don’t think droppin one 你好
get you local prices, cuz it’s not,
laowai speak a lil’ Chinese and think he’s hot,
talkin bout how many dishes he got.

听不懂 me though
These training schools sling my skin like dope,
I could be talkin out my ass,
and still be treated like the pope.

You rather have a lexus, or justice?
That QQ or substance?
A breadcar, a beamer or freedom?

Don’t China-hate,
just stay awake,
this is real 中国
and it don’t stop till they push the hutong off the block

Qujiang got that crazy shit,
Tang Dy-Nasty with a DQ in it.

PRC got that crazy shit,
man hella fast trains?
I don’t even trip in it.

(What a laowai gonna do?)

PRC got that crazy shit,
man 40 stories,
but nobody lives in it.