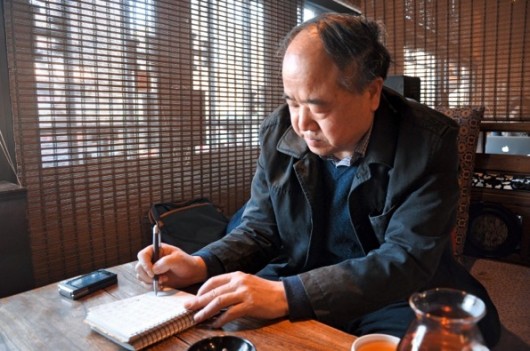 Since accepting the Nobel Prize in Literature on December 10, the controversial Mo Yan has turned down every formal interview request from every publication in the world. But he finally broke his silence last week, granting a sit-down with Germany’s Der Spiegel, one of Europe’s largest news weeklies. The article was published in this week’s (February 25) issue, roughly coinciding with the German debut of Mo’s novel Frog. The author promised only a “very short” interview but ended up talking for two hours, according to Spiegel, and the result probably could not have been better for the venerable magazine.

Mo Yan called his writing style “un-Chinese,” though said his novels contain “hope, dignity and power.” He said that he “realized that the Cultural Revolution was the mistake of individual leaders. It had less to do with the party itself,” which could have been the sound bite of the interview if he hadn’t proceeded to rebuke Liao Yiwu’s criticism of him, then turn his focus on Ai Weiwei.

“Another one of your critics is Ai Weiwei, an artist particularly well-known in Germany,” the Spiegel interviewer says, and one can almost picture Mo snapping:

“What does he have to say about me?”

(We don’t know that he actually snapped; the published account gives no stage directions.)

SPIEGEL: He too accuses you of being to close to the state. He says you are detached from reality and cannot represent current China.

Other highlights follow. Let’s start with this excerpt, out of which Der Spiegel pulled three words — “I am guilty” — for its headline:

SPIEGEL: Unspeakable things happen in many of your novels. In “The Garlic Ballads,” for example, a pregnant woman, already in labor, hangs herself. Still, “Frog” seems to be your sternest book. Is that why it took so long to write?

Mo: I carried the idea for this book with me for a long time but then wrote it relatively quickly. You are right, I felt heavy when I penned the novel. I see it as a work of self-criticism.

SPIEGEL: In what sense? You carry no personal responsibility for the violence and the forced abortions described in your book.

Mo: China has gone through such tremendous change over the past decades that most of us consider ourselves victims. Few people ask themselves, though: ‘Have I also hurt others?’ “Frog” deals with this question, with this possibility. I, for example, may have been only 11 years old in my elementary school days, but I joined the red guards and took part in the public criticism of my teacher. I was jealous of the achievements, the talents of other people, of their luck. Later, I even asked my wife to have an abortion for the sake of my own future. I am guilty.

Mo talks briefly about his writing…

SPIEGEL: Your books paint a bleak picture of modern China. There seems to be no progress. Neither your figures, nor society, nor the country as such seems to be heading anywhere.

Mo: I may be rather un-Chinese in this respect. Most Chinese stories and dramas have a happy ending. Most of my novels end tragically. But there is still hope, dignity and power.

…before dropping this semi-bombshell about the Cultural Revolution:

SPIEGEL: How do you yourself think about this? After all, you were forced to interrupt your education during the Cultural Revolution. And yet, you are still a member of the party.

Mo: The Communist Party of China has well over 80 million members, and I am one of them. I joined the party in 1979 when I was in the army. I realized that the Cultural Revolution was the mistake of individual leaders. It had less to do with the party itself.

The Cultural Revolution is referenced again as he addresses the media pressure that surrounded his Nobel win in the context of freedom of speech and Nobel Peace Prize recipient Liu Xiaobo:

SPIEGEL: But there are people in this country who are harassed, even arrested for what they write. Do you not feel an obligation to use your award, fame and reputation to speak out on behalf of these colleagues of yours?

Mo: I openly expressed the hope that Liu Xiaobo should regain his freedom as soon as possible. But again, I was immediately criticized and forced to speak out again and again on the same issue.

SPIEGEL: Liu received the Nobel Peace Prize in 2010. And indeed, repeated statements of support would make a greater impression than a single comment.

He also turned his attention to Chinese exile Liao Yiwu, one of his most vocal critics. (Liao organized a naked-run protest outside the Nobel Banquet Hall in Stockholm the night that Mo received his prize.)

SPIEGEL: When Chinese writer Liao Yiwu was awarded with the Peace Prize of the German Book Trade last year, he criticized you in SPIEGEL as a “state writer” and said you don’t keep enough distance to the government.

Mo: I have read his statement and I have read the speech he gave at the award ceremony. In the speech, he called for the split of the Chinese state. I can absolutely not agree to this position. I think that the people of Sichuan (the province where Liao is from) would not agree to cut their province out of China. I am sure Liao’s parents could never agree to this position. And I can not even imagine that he himself can, in the depth of his heart, agree to what he said there. I know he envies me for this award and I understand this. But his criticism is unjustified.

Mo clarifies that by “criticism” he’s referring to Liao’s accusation that Mo praised Bo Xilai in a poem.

Mo: … in a poem. Actually, the opposite is true. I was sarcastic, I wrote a satire. Let me jot it down again for you.

Sing-red-strike-black roars mightily,
The nation turns its head to Chongqing.
While a white spider weaves a real net that catches bugs,
A black horse with loose bowel movement is not an angry youth.
As a writer one should not be afraid of either a left or right party,
As an official one should hold dear one’s good name before and after his death.
A gentleman, a bedrock in turbulent waters, that you are,
The splendid cliffs shine on Jialing River like fire.

And he addresses the infamous book, which features his writing, that celebrates Mao Zedong’s 1942 Yan’an speech:

Mo: Honestly, it was a commercial project. The editor of a publishing house, an old friend of mine, came up with the idea. He had convinced around 100 writers before and when we attended a conference together, he walked around with a book and a pen and asked me, too, to hand-copy a paragraph of Mao’s speech. I asked “What should I write?” He said: “I chose this paragraph for you.” I was vain enough to take the opportunity to show off with my calligraphy.

There’s more over at Der Spiegel’s website. Go give the interview a read.