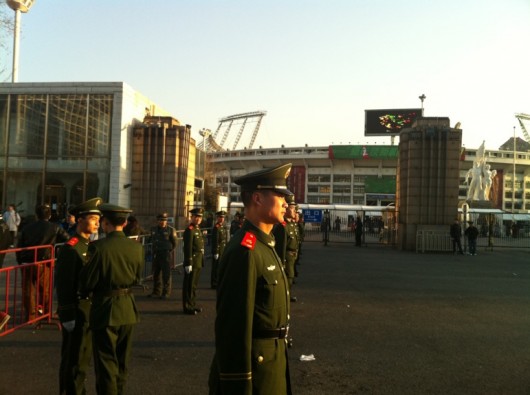 I would not recommend driving around Workers Stadium this evening, where I took the above picture. Expect throngs of people as FC Guo’an, Beijing’s hometown team, takes on Japan’s Sanfrecce Hiroshima in the AFC Champions League (game is wrapping up as we speak). Meanwhile, also prepare for tomorrow’s Pi Day over links.

Xi Jinping’s new VP? “A reformist member of China’s decision-making Politburo, Li Yuanchao, is set to become the country’s vice president this week instead of a more senior and conservative official best known for keeping the media in check, sources said.” (Reuters)

Tragic. “A six-year-old boy died after getting his head caught on a partially open van window on Saturday in Suzhou, Jiangsu Province, a website reported today. // …The boy was apparently trying to climb into the van when he slipped and got his head caught on the window. He suffocated as he wasn’t tall enough for his feet to reach the ground, the report said.” (Shanghai Daily)

This is so Ai Weiwei. “The artist said his interest in music was piqued during his 81-day disappearance, which supporters said was state retaliation for his activism. Officials accused the company handling his affairs of evading taxes – later hitting him with a £1.5m tax bill – and said his case was unrelated to human rights. // ‘To tell you the truth, I never listened to music. Then, during my detention, the guards were so bored they kept saying to me, “Can you sing a song?”‘ Ai said.” (The Guardian)

This man probably will not get far. “Twenty past three in the afternoon, a young man named Huang Wenxun (黄文勋) appeared on Huaqiang Road (华强路), wearing a shirt with the print ‘Rather be dead than live without freedom,’ and holding a big sign, the size of 1 X 1.2 meters.” (Seeing Red in China)

Walking naked outdoors will apparently get you kicked out of your government post. “Lassy Chiwayo returned to Pretoria after his contract in China’s commercial capital was ‘terminated for health reasons’, according to his foreign office employers who said he was receiving treatment. A source told The Daily Telegraph Mr Chiwayo had ‘mental health issues’. // Two South African newspapers reported that Mr Chiwayo, an ANC veteran who spent time imprisoned on Robben Island with Nelson Mandela, was found walking naked close to his home three months ago.” (The Daily Telegraph)

Corollary: Also on the story… (Shanghaiist)

Manny Ramirez going to Taiwan. “The 40-year-old slugger has had quite a career in the big leagues but has been unable to find a Major League Baseball (MLB) team. He has agreed to sign with the EDA Rhinos. // By signing on Ramirez, the Khaoshiung-based team is gaining 19 seasons of MLB experience, including 555 home runs and 1,831 RBIs (runs batted in).” (The Diplomat)

Not as crazy as you think, considering how much they love baseball there. “The March 8th extra-inning thriller between Japan and Chinese Taipei registered a 15.5 rating in Taiwan making it the highest rated cable program in the country’s history.” (MLB)

Haha, this was attached to my lunch from Urban Soup Kitchen today. “Our soups are dead-pig-water free”. #Shanghai twitter.com/mtashford/stat…

Spotted in a supermarket in Beijing: Chinese really do eat EVERYTHING. twitter.com/MissXQ/status/…

Meanwhile, vote in this other local magazine’s food awards. (TimeOut)

“In China, Dead Pigs With Morning Tea Is Nothing New.” (Adam Minter, Bloomberg) 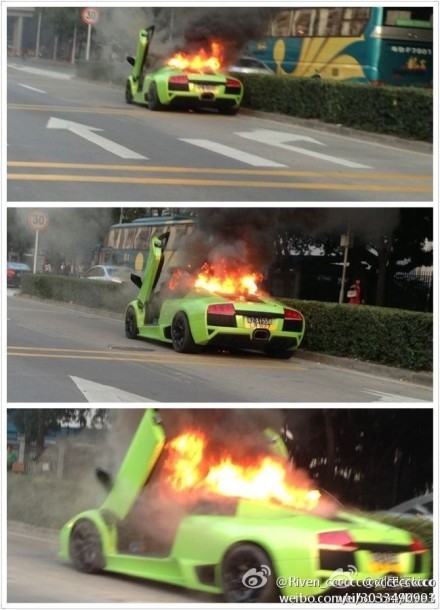