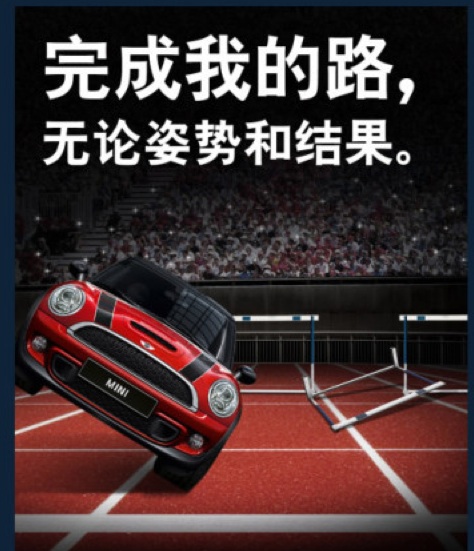 The Brand Channel has a very interesting article about how Liu Xiang’s inability to clear any hurdles in London will affect his ability to sell merchandise, specifically looking at how his sponsors have rushed to re-spin the message on the heels (no pun intended… wait, pun intended) of his crash-out yesterday.

Among the noteworthy elements of Abe Sauer’s piece is the above ad from Mini Cooper, with the accompanying message, “Completing my journey, regardless of position or results.”

So… Liu Xiang is an anthropomorphized Mini Cooper. Bravo, whoever thought of that. He’s a black and red Mini Cooper and is on two wheels instead of four because Liu Xiang in real life hopped on one foot instead of two. One over two equals two over four. Marketing school teach you this shit?

Also: it’s a goddam Mini Cooper. Sorry, but the ad is just so rottenly commercial for commercialism’s sake and exploitive that it really lays the marking industry bare.

The Sauer piece is interesting too for its look at Nike, which had invested heavily in the Chinese team, not just Liu Xiang. The Chinese basketball team, for instance, went 0-5, and was — with the exception of its first game against Spain — really awful in such a way that makes you want to lose hope in Chinese basketball or at least kick Wang Zhizhi in the shin (or at least steal something from him, because, you know… what I’m trying to say is, he is very bad at handling the basketball).

And then, as if this weren’t all bad enough for Nike, Sauer drops this:

The salt in Nike’s wounds is that China is otherwise doing spectacularly in London, trading the medal leads with America. Chinese brand Li-Ning is having a fabulous Olympics. Its Spain-sponsored basketball team is advancing and following a spectacular match that won him the badminton gold, China’s Lin Dan gave a thankful pluck to the Li-Ning logo on his jersey.

But that’s OK for the guys in Oregon. They sponsor a whole lot of other people, like US men’s basketball. And their marketing department isn’t Mini Cooper’s, so at least they dress up their commercialism instead of flaunting it like a naked tub of money-sucking lard.

In conclusion: be well, Liu Xiang. I’m sure you will be, with all your sponsorship money.