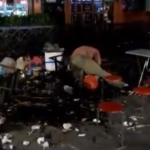 We've reached out to the guys who shot the video -- Canadians from WorldstarHipHop, as they make abundantly clear in the video -- to see if we can get more info. It's a nasty fight, if one can call it that, with a clear survivor. There are no winners. "Someone pull him off," someone says while the guy who's standing, bloody all over, continues connecting on kicks to the defenseless man on the ground. "It's done, it's done, you've won, you've won," someone else says, beginning to sound desperate.
(H/T Katie) Disputes happen on the streets all the time, but there’s always a bad way to resolve conflicts and a better way. The example here, from Chengdu, represents the former. I don’t want to speculate. But I see what I see, and others, surely, will as well: a white man spits in the face... Read more » 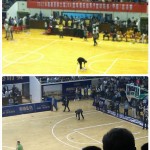 In the wake of the “British rapist” and Russian cellist, this won’t help Chinese-foreigner relations: a basketball team called the New Orleans Hurricanes — possibly this one from Texas – was in Jiaxing, Zhejiang province yesterday for an exhibition against the Zhejiang Guangsha Lions that ended in the worst way possible. In the above video (and below, on Youku,... Read more » 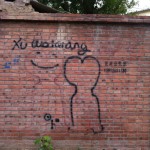 If you're in Beijing, don't forget about the Beijing Cream Bar and Club Awards party tomorrow. In the meantime, links. 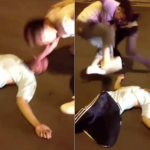 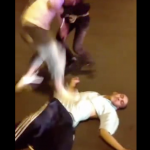 RFH first noticed this. Around the nine-second mark in the video, the girl appears to grab something out of the man’s pocket, then (possibly) drops it. Best guess is a wallet. UPDATE, 7:08 pm: As pointed out by a commenter, it could well be a cell phone that she had in her hand from the... Read more » 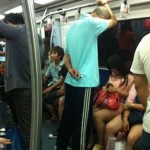 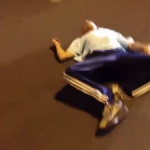 Youku video for those in China after the jump. UPDATES below. A lot of anodyne videos pass through my inbox, from travel companies and tourists at the Great Wall and musical performances at bars. Occasionally I’ll get a gem. And then, because it’s the Internet, occasionally I’ll get something like the above — footage of... Read more »