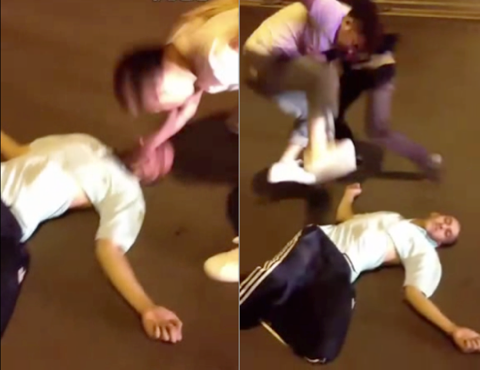 The Briton currently in police custody over allegations of sexual assault may be in plenty trouble – the Beijing Morning Post says he faces a “trial” in China, and his sorry story has even been reported by Reuters, in the New York Daily News and Kotaku – but so too may be the chaps who assailed him as he lay flat and out for the count on the highway near Xuanwumen on the night of May 8 (not, as Shanghaiist states, the Saturday previously; Shanghaiist also stated that he spent four days out cold. Guys: Fact check?). Sources told me police are “preparing a case” against the two men who were filmed striking the zonked-out Brit, adding that the PSB had little choice in the matter after the video was seen by some 2 million people on Weibo last week. [Ed's note: 10-plus million views on Youku now.] The have-a-go heroes in question are said to be upset, saying they considered themselves firmly in the right. Guys, you probably were… for about two minutes, until you started whaling on a near-dead drunk at 11 pm in front of police, then broadcast your happy-slap session to the nation. Reminded me of… well, Britain, actually.

Amazingly, the Global Times has posted an editorial (admittedly, in its expat section – the Hu hasn’t weighed in on the issue yet, but when he does, TAR Nation is surely poised to strike) that pretty much sums up the case. “There were no winners in last week’s video,” writes Tom Fearon. Our sentiments exactly. –RFH

5 Responses to “There Are No Winners: Everyone To Get Charged In Assault Case (Except Victim)”