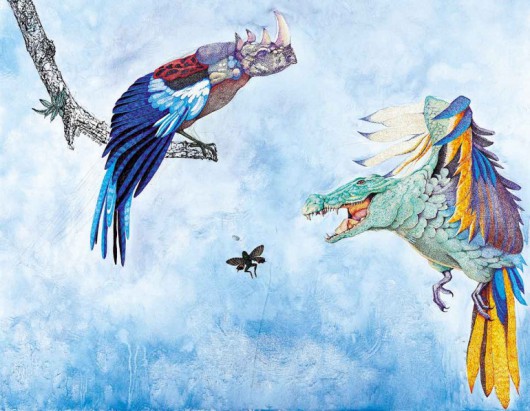 While most painters create their art using pen or brush, the avant-garde artist He Ling (@何玲Heling) uses medical syringes to bring his wild imaginings to life.

At his recent exhibition in Songzhuang Art District, the young artist displayed a series of mutant birds and beasts he created by injecting acrylic paints and dyes made from Chinese herbs into his canvas. The process resembles traditional embroidery in its delicacy.

Although He is a graduate of the Central Academy of Fine Arts, it’s not hard for the layperson to understand his unique artistic language. The combination of biological impossibilities with dreamy or nostalgic backgrounds creates an effect that is both terribly absurd and unusually familiar.

“Our ancestors and folk artisans expressed their understanding of the world – or their lack of understanding – using their imaginations,” He said. “Just look at the descriptions of some ‘species’ in the Shanhaijing,” a Qin Dynasty tome of myth.

“Modern people are rigid,” he said. “They think and behave according to their instructed rules and patterns. They have created a society that is spiritually divorced from natural inspiration.”

Through seemingly absurd images the young artist hopes to make viewers reflect on reality. In his work Yi Qin Tu, strange creatures such as bird-headed turtles, elephant-headed chickens and a combination of butterflies and bees call on viewers to consider pollution’s role in genetic mutation.

Another feature of He’s work is the comparison between human nature and animal instinct. Tong Wei Hu Sheng and Tong Wei Ma Qun depict the same theme – brutal cannibalism in the animal world – as well as more universal situations in human society.

“It is quite interesting to map human experiences onto the animals,” said Yang Wei, a local art critic. “Very often, when you compare a certain activity between human and animals, the former is much more absurd than the latter.”

He was born in 1981 in the remote mountains of Hunan province to three generations of village doctors. He spent most of his childhood in the family’s backyard clinic. Herbal medicine and old syringes were his toys.

“The pharmacy contained towering drawers full of exotic plants and other materials. Opening them was like being a little explorer. Some had dried leaves or colorful fruits. Some had roots or animal horns. Others were full of dead insects,” He said.

“It was a point of pride for me that I could find any medicine using its shape, color or smell when my mother assigned me to fetch something for a patient,” he said.

Apart from the playground of the pharmacy, various medical instruments were also He’s toys. Syringes were his favorite.

But as a maverick and young artist, He tends to resist genre classification.

“Magical realism is a Latin American genre that had its heyday in the 1950s. Its historical context and expressive intent have no relationship with my work,” He said. “I am more concerned about whether my art can resonate with viewers than figuring out what I should label it.”

In addition to his needle paintings, He has also experimented with sculpture, performance and installation to express ideas and ask questions. He said he is looking for mediums that will allow him more chances for interaction rather than limiting himself to personal expression. 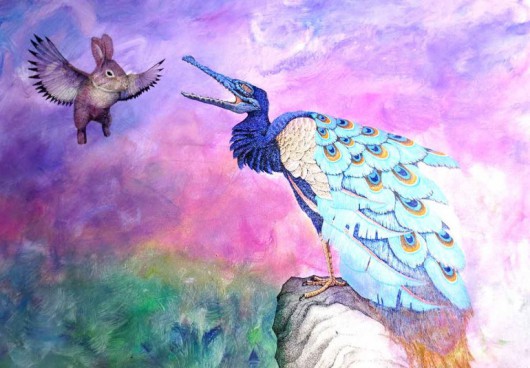 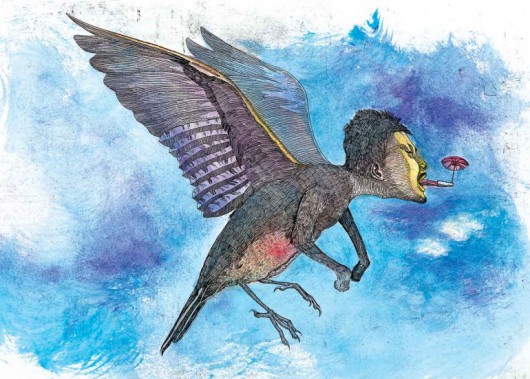 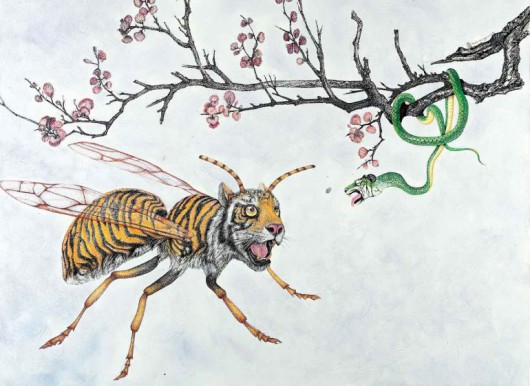 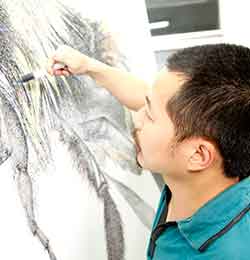 One Response to “Magical Realism? The Avant-Garde Artist He Ling”