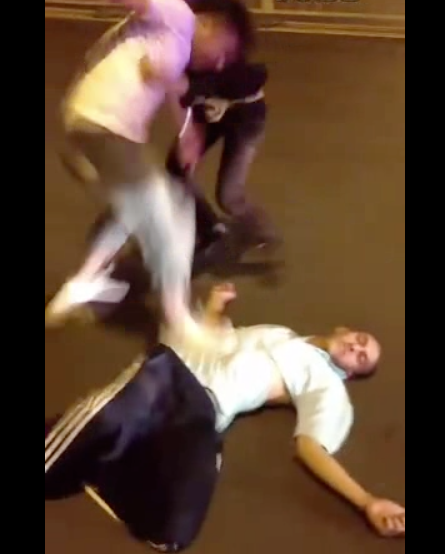 Global Times has followed up on the Xuanwumen incident from Tuesday evening and tracked down several witnesses, many of whom said police instructed them to not speak to media. GT was able to get one key witness on the record though:

The first Chinese man in the film seen intervening is a 24-year-old man, surnamed Wu, a security guard in the nearby China Co-op Group Building.

“After I grabbed his neck and saw he’s a laowai, I felt more obligated to save the girl,” Wu told the Global Times.

Ignore, for a moment, the reasons that statement might not make sense, and read on.

Wu claimed the incident happened right across the bicycle lane in front of the building, and said that more than 10 people were involved in the fight.

“When the girl screamed for help the first time, I thought it was a lovers’ tiff,” said Wu, “but after she screamed ‘I don’t know this guy’, I realized something was wrong,” said Wu.

“I went to the police station to make a statement, and I learnt the girl is only 18. Her life would have been ruined if we hadn’t stopped him,” said Wu.

Thanks to GT, we now also know that the person who filmed the video was — allegedly — the owner of A Jian Beauty Salon.

And regarding the photo RFH shared yesterday of the alleged perv in the subway, the person who took that picture is on the record too:

Xiao Lei, a sophomore college student, told the Global Times that he believed he had seen the man sexually harassing passengers in the subway at Yonghegong Station.

“He was making unspeakable movements with his penis obviously semi-erect in his pants to at least four girls, but no one said anything, neither those girls nor the passengers who saw it,” said Xiao, who posted a picture of a shaven-headed man, wearing the same clothes, standing close to a woman on a subway train at 10:40 pm that night.

As always, more info as it becomes available.

UPDATE, 5/15: An editorial in Global Times by Tom Fearon from yesterday evening:

There were no winners in last week’s video. Two wrongs, no matter how satisfying the second may seem, don’t make a right. The only person who can hold his head high from the assault is the middle-aged man who restrained an enraged youth from inflicting further harm on the prone Briton. Let’s be frank, he wasn’t going anywhere in his semi-conscious state and police were on the scene in minutes.

Regrettably, lynch mob justice is still deemed a suitable means of address in China. The popularity of human flesh searches, a ruthless online process that exposes individuals’ personal details, is testament to this.

Make no mistake that the victim of the incident wasn’t the foreigner who took what could be deemed as an excessive beating. It was the woman – somebody’s sister, daughter, cousin – shown at her most vulnerable moment and then beamed online for millions to view.

3 Responses to “Man Who First Intervened In That Infamous Video Speaks On Record, And Other Information [UPDATE]”