In the wake of the “British rapist” and Russian cellist, this won’t help Chinese-foreigner relations: a basketball team called the New Orleans Hurricanes — possibly this one from Texas – was in Jiaxing, Zhejiang province yesterday for an exhibition against the Zhejiang Guangsha Lions that ended in the worst way possible. In the above video (and below, on Youku, for those in China), players from the two sides are knee-deep in a full-on brawl while water bottles rain down from the crowd. One player, kind of hilariously, slips and falls on his backside. A much less funny thing happens at the end when an unidentified American hurls a chair into the stands.

Per the norm, Deadspin is first to this story:

Chinese social media sources suggest the argument came about due to neither side understanding each other’s language. It seems that sort of thing ought to be sorted out before an exhibition tour of China is launched.

Information is beginning to trickle in on social media and message boards. After the jump, the Youku video, plus pictures. UPDATE, 2:08 am: As told by Weibo user Rourou Shushu:

Chinese Yahoo‘s headline reads, “Zhejiang apologies to American team for incident, will punish instigator.” The act that precipitated this brawl, the article confirms, was indeed a hard foul by the Hurricanes, on Zhejiang’s Wang Bo. The article doesn’t mention the brawl, which is weird, noting instead that water bottles were thrown and the incident “lasted less than a minute.” The teams eventually came back out “to warm applause” and the two sides shook hands at midcourt. The Hurricanes won 93-84.

This NetEase article took a different tone, making sure to point out that “just as the situation was settling down, an American Hurricanes member suddenly threw the chair that was in his hand at courtside spectators.” The players were escorted back to the locker room while “the game became a chaotic farce.” Those are the last words. There’s no mention of the final score. 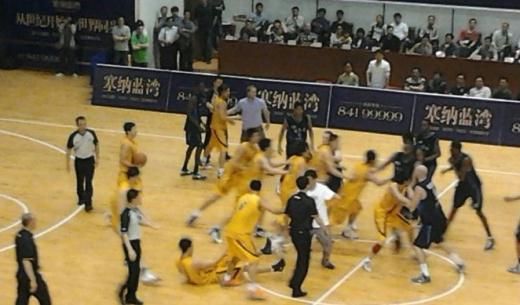 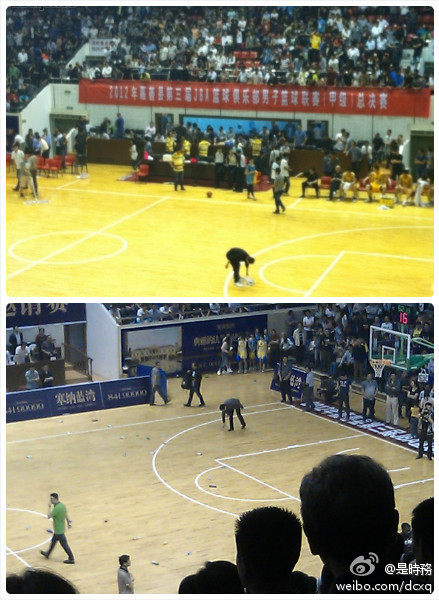