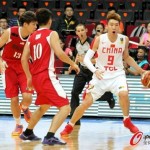 China got a wake-up call yesterday in the 27th FIBA Asia Championship in Manila, losing to South Korea 83-79. Today, it took out its frustration on Malaysia with a historic beating. China scored the first 28 points. More than nine minutes lapsed before Malaysia made a bucket. A lot of times in blowouts, a team will race ahead to a large deficit -- 40, maybe 50 points -- and then put it on cruise control. The overmatched but determined opponent will then shave the margin to a respectable 30 by game's end. This is not what happened here. 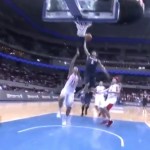 South Korea's not known for its basketball, but it made a huge statement in the opening game of the FIBA Asia Championship yesterday in Manila, beating the defending champs -- that's China -- 83-79 in a game that Nick Bedard of Buddha Basketball said kept "everyone... on the edge of their seats." 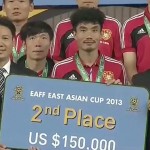 You could be forgiven for thinking that, entering its third and final match in the East Asian Cup on Sunday in Jamsil Olympic Stadium in Seoul, China had already exceeded expectations. Its toughest tests came in the first two games of this four-team tournament, and it passed -- "won," one might say, in the way that soccer teams can win draws. It mustered a furious late rally to erase a 3-1 deficit against Japan last Sunday, then summoned an intense defensive effort to keep a fesity South Korean squad out of the net on Wednesday -- this from a team that gave its weary fans no reason to expect these results, having convincingly lost its three previous contests. 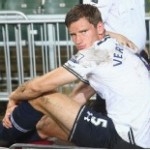 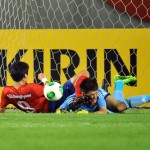 The Chinese soccer team pulled off another minor miracle on Wednesday night in its second match in the East Asian Cup, withstanding South Korea's relentless attacks and holding them to a scoreless draw in Hwaseong Stadium near Seoul. It was the second positive result this week -- on Sunday, China roared back from two goals down to tie Japan 3-3 in the final minutes, its first non-loss in four matches. Now, two non-losses in the last two. If these guys keep this up, movies will be made about them. 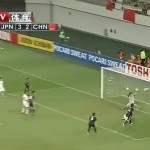 China's soccer team scored two goals in the final 10 minutes to snatch an improbable 3-3 draw against Japan in the opening game of the 2013 EAFF East Asian Cup on Sunday in Seoul. China had lost three consecutive games, including an embarrassing 5-1 home defeat to a mostly junior Thailand team last month. Japan are Asian champions. This result was not expected. 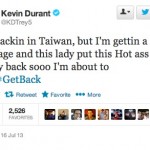 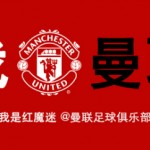 On Wednesday, AFP reported that Manchester United, the storied 135-year-old football club, finally joined Twitter and Sina Weibo. It has 446,714 followers on Twitter as of this moment and a modest-by-comparison 171,510 followers on Weibo, but realize this: Arsenal, which has had a Sina Weibo account for at least a year and has posted 7,238 messages compared to Man U's 46, has only 88,815 followers. Even in the realm of Chinese social media, the Red Devils reign supreme. 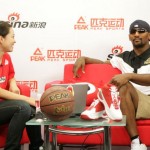 Former Los Angeles Lakers basketball player Metta World Peace, the artist formerly known as Ron Artest, apparently had a very impressionable trip to Beijing and Qingdao recently, because now he's thinking about playing basketball in this country, perhaps with Yao Ming's Shanghai Sharks. This would be a win for everyone, especially us. And you. Metta World Peace is awesome. 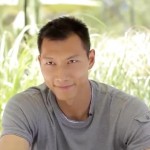 We've seen NBA players -- namely, those on the Miami Heat -- try to speak Chinese before, to bad results. We wish we could say this video, featuring Dwight Howard and John Wall, was better, but why would we say that? Actually, a few reasons: