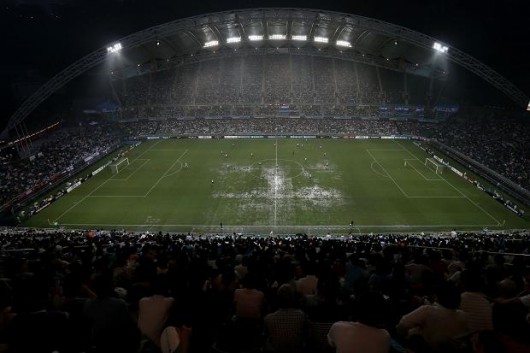 Belgian international Jan Vertonghen, a key piece in Tottenham’s defense, suffered an ankle injury in the second half of a friendly at Hong Kong Stadium yesterday. He slipped on the watery turf and now may miss the start of the English Premier League campaign on August 18, depending on MRI results.

His manager, understandably, was not happy. “I was concerned but what can you do?” André Villas-Boas said about the conditions. The game was delayed 30 minutes and each half reduced to 40 minutes due to the weather.

“It isn’t great,” he continued. “The pitch is what it is. You can’t change the conditions. They are extremely poor.”

“The choice of the venue is this one and the weather is unpredictable. The pitch is what it is and has always been like this in this trophy. It isn’t great but nobody is going to change it for next time.

“Obviously the conditions are extremely poor and the players are vulnerable to this type of situation.”

It’s unclear how upset he was about the game itself, a 3-1 defeat to Sunderland. It was an exhibition dressed up with a fancy name, as so many of these things are — the Barclays Asia Trophy — attended by 35,900 fans. Gareth Bale was not on the pitch.

Of course, injuries happen all the time in sports, so we can’t blame Hong Kong or the stadium or the weather. AVB shouldn’t have brought on his best defender as a second-half sub if he really wanted to keep his best players 100 percent healthy going into its season-opener.

But make no mistake, this injury sucks. Every game and every player and every point counts, as the Spurs know better than anyone — they finished one point behind Arsenal last season, the difference between Champions League and Europa, millions of pounds and all the commensurate glory. 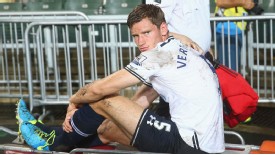