The Chinese soccer team pulled off another minor miracle on Wednesday night in its second match in the East Asian Cup, withstanding South Korea’s relentless attacks and holding them to a scoreless draw in Hwaseong Stadium near Seoul. It was the second positive result this week — on Sunday, China roared back from two goals down to tie Japan 3-3 in the final minutes, its first non-loss in four matches. Now, two non-losses in the last two. If these guys keep this up, movies will be made about them.

We know, of course, that South Korea and Japan aren’t fielding their top squads. Their best players are preparing for the World Cup, while China’s national team veterans desperately need vindication after a string of horrible performances this year. Still, South Korea was “out for revenge,” in the words of The Chosunilbo, having previously lost 3-0 to China in the 2010 East Asian Cup. This inspired South Korean side — playing at home, no less — was surely still favored to seize a decisive result.

And remember, even when playing with its experienced A team, Chinese football isn’t much good. Before Sunday, it had lost three consecutive games, including 5-1 to a mostly junior Thailand team. So what in the world changed, other than the coach? The effort? Suddenly it feels like they’ll never lose — certainly not with goalkeeper Zeng Cheng doing his best Iker Casillas impression, stymieing chance after South Korean chance in the first half. Check him out: 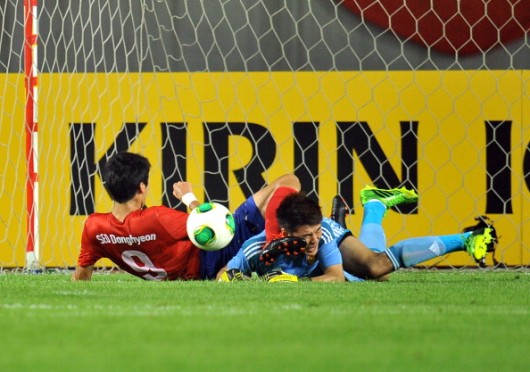 The East Asian Cup is a four-team round-robin tournament. Three matches down, and no team has managed to win (or lose). Three more will be played.

Will China’s unlikely run continue? They’re playing for nothing else, and probably won’t compete for another trophy anytime in the near future. It damn well better.

Its next and final game will be Sunday vs. Australia.

One Response to “Chinese Football Does It Again, Wins 0-0 Draw vs. South Korea”