You could be forgiven for thinking that, entering its third and final match in the East Asian Cup on Sunday in Jamsil Olympic Stadium in Seoul, China had already exceeded expectations. Its toughest tests came in the first two games of this four-team tournament, and it passed – “won,” one might say, in the way that soccer teams can win draws. It mustered a furious late rally to erase a 3-1 deficit against Japan last Sunday, then summoned an intense defensive effort to keep a fesity South Korean squad out of the net on Wednesday — this from a team that gave its weary fans no reason to expect these results, having convincingly lost its three previous contests.

But Sunday’s game was more than merely cosmetic. China actually had a chance to win the championship.

Duly invigorated, the Chinese played their best football of the year for the first 87 minutes, and led by a resounding 4-1 score thanks to goals from four players all aged 26 or younger. Two Socceroo goals in the next five minutes took a bit of luster off China’s win, but the result was nonetheless a vital step for a team still trying to recover its pride after bombing out of World Cup qualifying, losing 5-1 to Thailand, and firing its coach.

The scoring began in the 4th minute, with Yu Dabao drilling a shot inside the right goalpost. After Australia tied it in the 29th minute — off a screamer of a 30-meter strike by Aaron Mooy, a dazzling golazo that you should watch in the video embedded below — all was quiet until 11 minutes after halftime, when China struck again. Yu fired a shot off Australian goalkeeper Mark Birighitti – who was excellent all game, and probably saved at least one more goal — who deflected the ball straight to Sun Ke. The 23-year-old, who only made his national-team debut in March, tapped in the rebound to give China the 2-1 advantage. (This was Sun’s second score of the tourney — his first was the dramatic final goal in the 3-3 tie against Japan.)

China’s best moment, however, came in the 87th minute, when it pulled off a bit of footballing artistry that one rarely sees from this side. Yang Hao, on the right wing, perfectly redirected a lob pass with his back-heel onto the foot of a streaking Yang Xu, who carried the ball 20 yards into the box before slotting it between Birighitti’s legs.

A mere minute later, Wu Lei controlled a pass just past midfield and split two defenders in a blaze of speed, nimbly turboed away from a would-be tackler, and struck the ball over the keeper’s left shoulder to give China its fourth. It was a world-class display from the 21-year-old — and the first international goal of his career. BTV’s color commentator was positively giddy, for good reason. “It’s been a long time since we’ve seen the national team perform like this!” He continued with a bit of useful advice for fans of Chinese soccer: “Remember these young names: Yang Sun, Wu Lei, Sun Ke, Ya Dabao.”

Japan, which used a 91st-minute goal to edge South Korea 2-1 in the nightcap, won the tournament. (If South Korea had held on for the draw, we would have tallied up Japan and China’s yellow and red cards received to determine the champ.) But in many ways, China won, too. The East Asian Cup was a chance for a clean start, a low-expectation tournament in which younger players could prove they deserved larger roles on the national team. They may have done themselves one better: convinced fans back home, just possibly, that the national soccer program has a future.

Here’s to hoping the people in charge don’t mess it up. 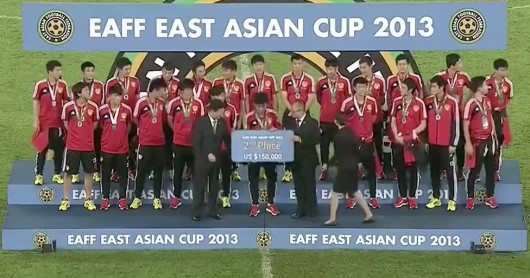 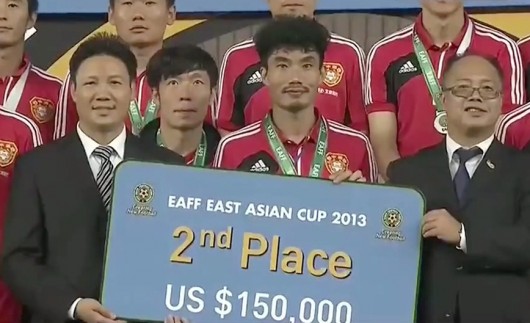 China counters with a bit of brilliance:


Youku versions of above: