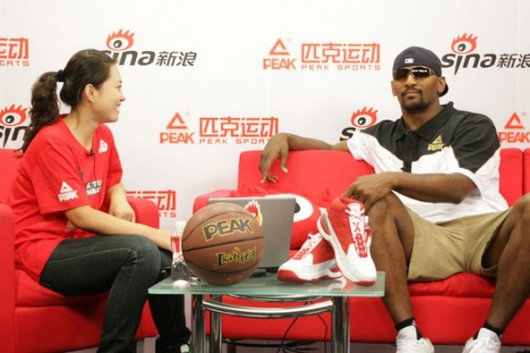 Former Los Angeles Lakers basketball player Metta World Peace, the artist formerly known as Ron Artest, apparently had a very impressionable trip to Beijing and Qingdao recently, because now he’s thinking about playing basketball in this country, perhaps with Yao Ming’s Shanghai Sharks. This would be a win for everyone, especially us. And you. Metta World Peace is awesome.

Check out how he reacted to news of his impending release from the Lakers (“My news is that My favorite burger spot called “My Favorite Burger” added extra gratuity cost to the vegan burgers.. Worst day ever”), or him saying he’s too sexy for his cat, or any of his weather reports. Just scratching the surface. In China, his tweets alone about babies pooping in public would make a fine standalone blog. He also raps, and has a book.

For World Peace’s part, he seems very enthusiastic about coming here, more so than Allen Iverson ever was. Reports ESPN:

“I don’t really want to play for anybody,” World Peace said Friday at the Lakers’ practice facility. “I don’t want to go anywhere. I want to go to China, or coach or play arena football.”

Basically, the only two teams World Peace would play for in North America are the Los Angeles Clippers and New York Knicks. But even New York is falling behind in World Peace’s heart:

“I had a chance to play in New York [in the past],” World Peace said. “I wanted to play in New York when I was in my prime and I was young, fierce, lock-down [defender]. Madison Square Garden, that would have been sick. But right now, China is way more adventurous for me.”

If China doesn’t work out, he is also entertaining the options of coaching or playing arena football. Because he’s awesome.