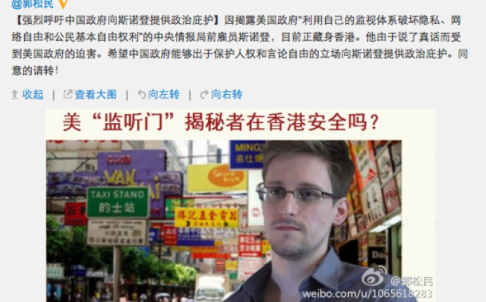 Edward Snowden sat down with the South China Morning Post yesterday, causing the editors of that Hong Kong-based paper to somewhat lose their minds with SCOOP FEVER. (Which article do I link to? The 3:31 am one that has EXCLUSIVE splashed across the headline — even though Snowden’s spoken with several media outlets already — or the one from 19 minutes later, or the one from 7:37 am on the same subject? There’s another version from earlier, 12:52 am.)

Snowden reveals to SCMP’s Lana Lam that he has been in Hong Kong since May 20, and that:

“I have had many opportunities to flee HK, but I would rather stay and fight the US government in the courts, because I have faith in HK’s rule of law.”

“People who think I made a mistake in picking HK as a location misunderstand my intentions. I am not here to hide from justice, I am here to reveal criminality,” he said.

Finally, there’s this revelvation — which he told the Guardian earlier, though not with numbers — that the US government, yes indeed, hacks other countries, countries like China.

Snowden believed there had been more than 61,000 NSA hacking operations globally, with hundreds of targets in Hong Kong and on the mainland.

“We hack network backbones – like huge internet routers, basically – that give us access to the communications of hundreds of thousands of computers without having to hack every single one,” he said.

“Last week the American government happily operated in the shadows with no respect for the consent of the governed, but no longer. Every level of society is demanding accountability and oversight.”

Because it’s Hong Kong, of course there’s a march planned, for Saturday at 3 pm. More info on the Support Snowden website.

Edward Snowden: US government has been hacking Hong Kong and China for years (SCMP) (Image via Sina Weibo via SCMP)

3 Responses to “Edward Snowden Will Stay In Hong Kong Because He Has “Faith In HK’s Rule Of Law,” Talks More About US Hacking”