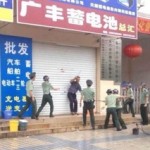 Two are dead and three injured after the third knife attack in the past week in China, this time in Guangxi province. Unlike the previous two incidents, both indiscriminate attacks in Beijing, the suspect on Tuesday had a target: family planning officials in Dongxing city. 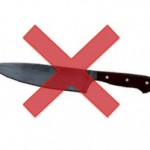 Beijing Times reports via SCMP that supermarkets in Beijing have been instructed to stop selling knives. This comes on the heels of a city-wide crackdown on "illegal weapons," SCMP reports, which led to 1,123 knives and 327 guns being seized. We do wonder what exactly would make a knife illegal. 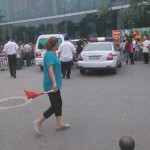 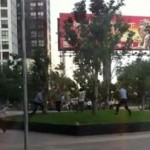 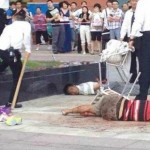 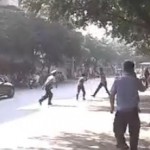 In Chengdu yesterday, a man with a knife reportedly kidnapped a child in Jinniu District. Cops quickly arrived on the scene -- specifically, Weng Hailin and Lu Mingjian -- setting up a dramatic confrontation, part of which you can watch above. According to the Jinniu Public Security Bureau, Weng was stabbed in the left arm, severing artery. The knife-wielder was eventually subdued with the help of surrounding residents. 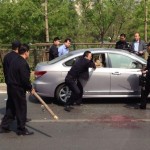 A man from Bayan, Heilongjiang province attacked random drivers and passengers with a knife near Guangqumen Bridge in Beijing on Saturday afternoon, killing two and injuring another. Police say Li Jinghui, 36, "took the drastic actions because he had trouble in his relationship," according to Xinhua. Li ducked into a car and was dragged out both citizens and police. During the ensuing scuffle, which you can watch above, Li suffered fatal wounds. "Police eventually took control of the situation but Li later died in hospital from his injuries," writes Xinhua. 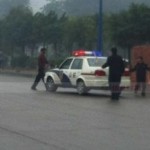 Tuesday morning in Guangzhou's Huangpu District, a man believed to be mentally unstable ran around trying to chop random people with a knife. He reportedly injured two, a 45-year-old male pedestrian and the female owner of a secondhand shop, before encountering police on Dianchang Road. The man began chasing the cops, remaining ever crazy. After repeated warnings fell on deaf ears, officers pulled out firearms and, still retreating, fired several shots. 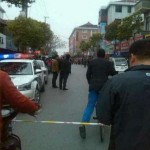 According to Xinhua, a knifeman in Shanghai's Fengxian District killed two of his female relatives with a knife yesterday afternoon before hitting the streets and wounding 11 random people on the street, including two children. Police said he arrived in Shanghai on Tuesday from Jiangsu province. 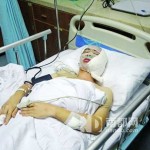 “The most painful part isn’t the stabbing, but that society doesn’t understand.” That’s a quote from Guangzhou chengguan bureau chief Wei Weihan, who recently saw one of his own stabbed seven times, including five times in the head. On Sunday, Su Jiaquan, 26, was doing his job when a pineapple peddler attacked him with a... Read more »