We don’t have a lot of information about this video just yet, but it was sent to us recently by YouTube user Scott AH, whose e-signature suggests he’s with Comedy Club China. It’s a good one, if only for this scene at the 19-second mark: 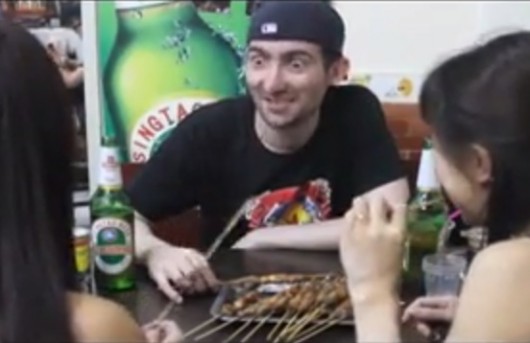 Rice Rice Baby is not to be confused with Weird Al Yankovic’s song by the same name. Instead, make some room on the shelves of China expat music videos, folks. This wonderfully bug-eyed beat belongs.

UPDATE, 11/6, 12:45 am: Scott is referenced as “a lanky American” in the final two paragraphs of this Atlantic article about stand-up comedy in China:

Back at the Hot Cat Club, a lanky American leaps on stage clutching a chuanr –or meat kebab — in one hand and a microphone in the other. He starts beat-boxing to the tune of Vanilla Ice’s “Ice Ice Baby,” then delivers a pitch-perfect rap on the intricacies of catching food-poisoning from eating Beijing street food. The crowd roars with laughter and cheers as he charges off stage.

He might not be Russell Peters, but for the audience at the Hot Cat Club, he’s comedy gold.

And now the lyrics:

All right stop, put down your tea and listen
Time to talk culinary tradition
Stomach starts churning tightly
Flows to my asshole daily and nightly
Will it ever stop? Yo, I don’t know
Ate gutter oil just an hour ago
Too the extreme I rock the chuanr and the jiaozi
Light up the stage, stuff punks like they baozi
Eat. Duck neck to consume
That’s ok to eat, just a weird mushroom
Deadly, if it lacks refrigeration
But saving bad food just builds a strong nation
Love it or leave it, you better gain weight
You better just down it, lick that plate
If they serving Chinese, yo, I’ll eat it
Take it dao bao, tomorrow reheat it

Now that your tastebuds are jumping
MSG kicked in, Sichuan peppers are pumping
Quick to the point, to the point, no faking
Eat that rice with a pound of bacon
Stir frying it, cooked quick and nimble
On the menu can’t read the symbols
We can get some soup near Temple
I’m on a roll, it’s time to go solo
Rolling, on my bicycle
Got to find a place that serves egg rolls
Girlies on standby, waiting just to say ‘hi’
Did you stop? No, I just rode by
Kept on, pursuing to the next stop
I bust a left and I’m heading to the next block
The block was dead, yo, so I continued to
A1A Gulou Avenue
Girls were hot, wearing lens-less glasses
Other lao wei just sitting on their asses
Jealous, cos I’m out getting mine
Niu rou with the beer and hotpot with the wine
Ready to climb the Great Wall
Eat some roast duck then do a pub crawl
Fuyuanr! Shout out like a bell
I ordered fish and it came in shells
Devouring the shellfish real fast
When I left, ass about to blast
Bumper to bumper, the ring road was packed
Trying to get away because my stomach feels whack
Chengguang are on the scene
You know what I mean?
They passed me up, they chowing on some pig spleen
If they serving Chinese, yo, I’ll eat it
Take an Instagram, then I’ll tweet it

Take heed, cos I’m a lyrical poet
Beijing is on the scene just in case you didn’t know it
My town, that created all this great chow
Enough to make me smile wide and say ‘hen hao’
But grease like a chemical spill
Take a break so your colon can heal
Seasoned and fried, this is a hell of a concept
We make it hot, and you want to come taste this
Cooks play with the blades
Slice like a ninja, cut like a razor blade
So fast, other chefs will say damn
If rhyme was a food, I’d eat it gai fan
Keep my composure when my sphincter gets loose
Give up the beer, only drink juice
If they serving Chinese, yo, I’ll eat it
Health inspection? Really don’t need it

One Response to “Vanilla Ice Parody “Rice Rice Baby,” Filmed In Beijing, Is Well Worth Your Time”