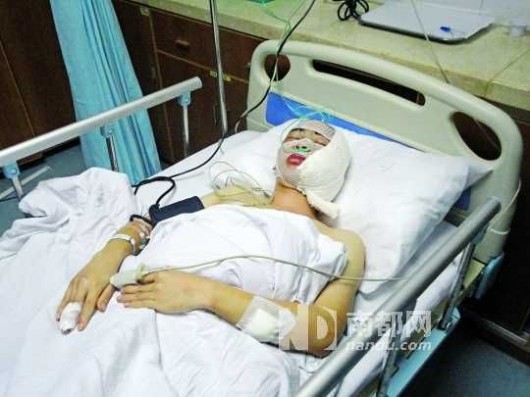 “The most painful part isn’t the stabbing, but that society doesn’t understand.”

That’s a quote from Guangzhou chengguan bureau chief Wei Weihan, who recently saw one of his own stabbed seven times, including five times in the head.

On Sunday, Su Jiaquan, 26, was doing his job when a pineapple peddler attacked him with a knife. According to eyewitness Zhong Yongde, absolutely no one came to Su’s aid. “At the time I thought it was very sad,” Zhong said.

Su is in stable condition, but his face may be scarred for life. The Nanfang notes that bureau chief Wei has asked for public sympathy. Perhaps the young man deserves it:

Su’s parents have not yet been informed. They both have heart conditions and may not be able to handle the news, media reported. Su also has a 1 year-old son.

Apparently only nine staffers, including Su, man the five-square-kilometer neighborhood of Pojie in Guangzhou’s Tianhe District, which has a population of 200,000.

We don’t like the chengguan system, but that doesn’t mean individual chengguan deserve to be stabbed. And now we fear for the peddlers in the area, who stand to suffer if the cycle of violence doesn’t end.

6 Responses to “Chengguan Stabbed 7 Times: “The Most Painful Part Is That Society Doesn’t Understand””