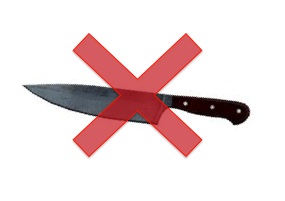 Beijing Times reports via SCMP that supermarkets in Beijing have been instructed to stop selling knives. This comes on the heels of a city-wide crackdown on “illegal weapons,” SCMP reports, which led to 1,123 knives and 327 guns being seized. We do wonder what exactly would make a knife illegal.

The order was in response to two stabbing incidents in Beijing this past week. On July 17, a mentally deranged man from Yishui, Shandong province killed two people with a knife, including an American, outside Chaoyang Joy City Shopping Mall. Five days later, a local man killed a woman and seriously injured a two-and-a-half-year-old child outside a Carrefour on Malian Road.

The city has previously restricted knife-buying on more than one occassion. In January 2012, knife-buyers were required to show their ID cards. Later that same year, knives were banned ahead of the 18th Chinese Communist Party Congress, along with other restrictions that people may or may not have followed (taxis had to keep their windows up, etc.). And in September 2009, the city temporarily halted knife sales in response to a pair of stabbings.

The 2009 incident is worthy of revisiting, for context. Here’s what AFP reported at that time:

Police have said a Chinese man stabbed two people to death and wounded 14 on Thursday in the Dashilan shopping area near Tiananmen Square, where a military parade and other events are planned for Oct. 1.

On Saturday another Chinese man slashed an elderly French woman with a knife in the same area just south of the large square, a French embassy spokesman said.

Yes, random acts of violence happen now and then, especially in a city as big and diverse as this one. For whatever it’s worth, people don’t seem all that worried — “But what if someone goes into a supermarket and kills someone with a Durian?” social commenter Yao Bo wrote on Sina Weibo — so you’d be safe to assume all will return to normal in no time, including knife-buying procedures.

Doubly assuming, of course, we see no other random attacks in the near future. Think about crossing your fingers if you must.