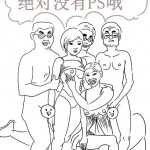 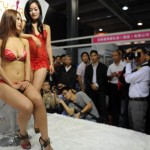 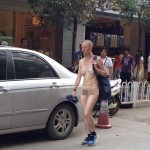 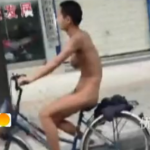 Why not? Why the hell not? This Youku comment on the video probably wins: 三言两语说: This is breaking through the ego, laughing at the mortal coil.
Scant info is available about this picture, except that it was posted earlier this week, taken at the intersection of Songjiang and Jinyu, city unknown. Commenters on Weibo speculate the grandma is doing this to get drivers to slow down. Or maybe it’s to cause drivers to rubberneck and crash? #MinorDifferences (Via Car News China) 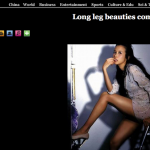 1. Come where? I don’t understand. 2. ::shakes head slowly, pours whiskey, raises glass to salute Xinhua:: [Xinhua] (H/T Alicia)
In a marked contrast to how certain authorities in Shanghai view women in provocative attire, the Guilin Merryland Resort in Guilin, Guangxi Zhuang Autonomous Region is offering half-price entry to women 18 and over who wear skirts shorter than 38 centimeters — and they’ve pulled out the tape measure to make sure no one is cheating.... Read more » 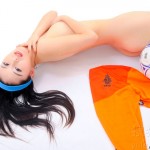 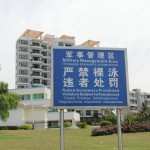 Nude beaches are pretty uncommon in China, if only for the fact that beaches here are always packed with people, most of whom, surely, have no desire to see any choads. But a tourist in Sanya, Hainan province (the "Hawaii of the East"), Tian Ma, recently found himself looking in at a nudist resort -- a cleverly disguised one -- and thought what anyone would think: picture time! He stealthily took the images above and after the jump and posted them on his blog, Tian Ma Topics.