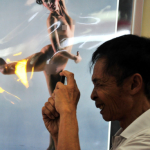 We brought you pictures of the 10th annual Guangzhou Sex Culture Festival yesterday evening, but by far the best picture from that event — which, sadly, ends today — is the one above. I want you to notice the small gray box that is partially obscuring the picture of the woman’s breast on the left... Read more » 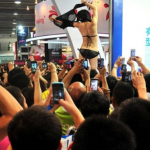 The Guangzhou Sex Culture Festival is always a big deal because, you know, sex. Created in 2003 by Zhang Feng, a soldier-turned government official who goes by “Brother Feng” in his books, Guangzhou’s annual sex lollapalooza draws hundreds of thousands of visitors every year. “Sex is like food,” Zhang said in a 2010 interview. “It functions at the very... Read more » 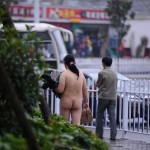 We only know what Sohu tells us: woman is in her 30s, walking along Beijing West Road in Guiyang, Guizhou province, clothing in her left hand, shoes in her right. Looks like it’s raining. Chilly, perhaps. Police arrive eventually, and nothing else needs to be seen. Previously in mysterious public nudity: White Woman Walks Naked... Read more » 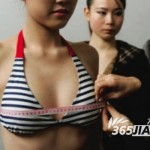 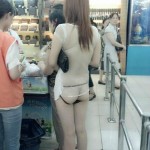 Now you see her…

This is so lame.
Four protesters in Shenzhen on Tuesday afternoon came up with a creative way of voicing discontent over the Japanese claims on the Diaoyu islands. With bayonets between their thighs — and three of them in swimwear — they chanted things like, “Civilized patriotism, rational Japanese resistance.” I think what they mean is: don’t do this.... Read more » 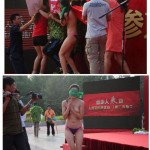 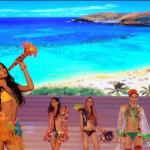 We’re not sure what this “2nd China International Sandy-Beach & Swimsuit Culture Exposition” is, nor have we heard of Huludao, Liaoning province, which is hosting this expo that began yesterday and lasts until Sunday. We only know what’s in the photos, and that Xinhua put them on its website, because of course it would.