Qu Shitao, a student at Donghua University of Science and Technology in Jiangxi province, lost his right leg when he was three years old, but that hasn’t stopped him from playing the sport he loves.

When fellow students first saw him hit the outdoor courts, they weren’t sure how to react. Go easy on him, right? But Qu, with his trademark spinning layup — pivoting on his crutch, which he upgraded to a metallic version for better handling — proved he could hang with his competition. No one plays defense in China’s pickup basketball scene, anyway.

Qu’s story was publicized on Sina Weibo last month, and it wasn’t long that the media came calling. (In the newscast above though, couldn’t they have shown him making just one jumpshot?) China Hush reports:

He met with Yao Ming recently and was surprised by his newfound fame. According to QQ Sports:

A few days ago, Qu Shitao told a reporter over the telephone that when he went to Shanghai and met with Yao Ming, people had come from thousands of miles a way to hear him speak. He had never imagined that his dream would become a reality like this.

…After two days had passed, Qu was still quite in awe of the whole experience. “Shanghai, walking around here, like I said earlier, today was an amazing day. Thank you to Big Yao for caring about me! Sad to say goodbye!!!” Those were his comments before leaving on Tencent Weibo. It was his first time to go to Shanghai and his first time to see a CBA competition.

Below, in Shanghai, that sure looks like Gilbert Arenas with a hand on his hip, watching Qu, probably wondering if he’ll ever put forth half the effort of this one-legged player. 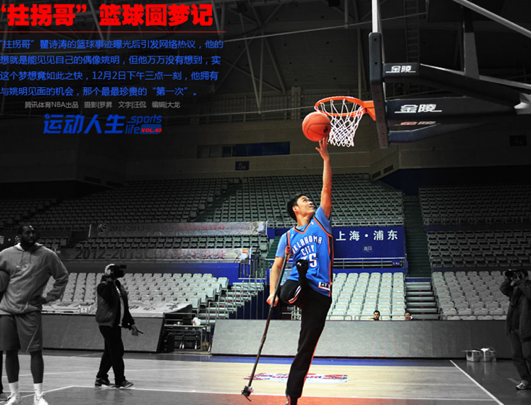 Qu shows off more of his skills in the video below. The picture is via @TencentSports. 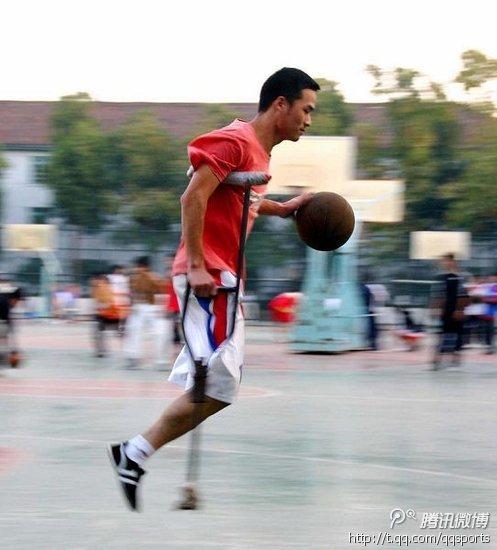