Ed’s note: First, watch the above trailer. It’s awesome, isn’t it? It’s the preview for The New Masters, a proposed full-length documentary about mixed martial arts in China directed by Christopher Cherry and David Dempsey. You can learn more about it, which has the makings of something special, over on its Kickstarter page. Or keep reading, as screenwriter and producer Sascha Matuszak explains the inspiration behind this project.

The first time I got a look at mixed martial arts in China was back in 2012 at the Ranik Ultimate Fighting Federation (RUFF) Superfight in Hohhot, Inner Mongolia. I saw a thuggish looking white dude sitting by the huge pane glass windows of the Shangri-la hotel, sipping coffee and grinning like he knew something we all didn’t, and I was drawn to sit down and order myself a coffee. The white dude was Vaughn “Blud” Anderson, an OG in the China mixed martial arts (MMA) community, who spent the next two hours spinning tale after tale, some connected, others ending abruptly with a look out the window and a head shake, all of them riveting. I had shown up as a freelance blogger for the Economist’s Analects blog, on an assignment that both my editor and I knew was probably not going to run (it did), but when I heard Vaughn’s stories, and met the founder of RUFF, bigger-than-life Joel Resnick, I knew I had found a seam of gold in China’s coal belt.

That meeting led to a host of articles for Vice’s Fightland magazine and a chance meeting at the Shaolin temple with filmmakers Christopher Cherry and David Dempsey. When the three of us met, it seemed a no-brainer to turn my rambling book project (still in progress) into a film. We started working at it. For the next eight months, we traveled across China filming MMA fights, interviewing fighters, meeting kung fu masters, and meaning about the story of martial arts in China today.

What we’ve learned is that martial arts in China is a sundered art, with Taiji going one way, Performance Wushu another, combat Sanda in yet another direction. The kung fu masters we see in the movies, the guys who master the whole art, are disappearing from the landscape. There are still many, many bona fide kung fu masters out there – we’ve met several and filmed them – but they are unmistakably shrinking in number.

Throw modern MMA into this mix, and you have a catalyst for great change. The whole martial arts community in China is reacting to the arrival of global MMA, and we are trying to capture that moment in time with our film, through characters that span the community’s breadth – kung fu people, MMA fighters, promoters and middlemen… basically anyone who can help us tell this story.

The story is compelling in many ways for us. The martial arts angle is fascinating, because people who do not practice martial arts naturally have a sense of respect and awe for those who dedicate their lives to this art form. Also the meeting of World and China is still something that happens every day, still creates sparks, still provides the space for innovation and transformation, and incredible energy. Also the idea of traditional art forms vs. modern art forms is interesting to watch, because the melding of the two will, hopefully, create something new and useful and enduring.

Sascha is a writer and filmmaker living in Chengdu. You can follow him at @saschamatuszak. Support The New Masters on Kickstarter and like it on Facebook. 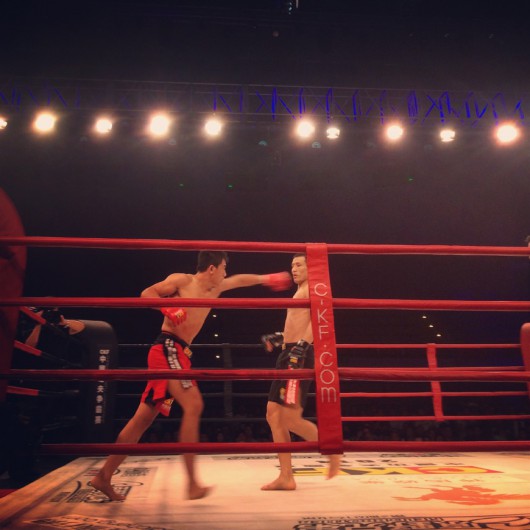 5 Responses to “Introducing: “The New Masters,” A Documentary On MMA In China”