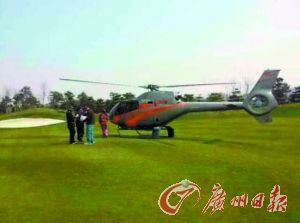 A very rich man on a golf course reportedly had a helicopter deliver him a bowl of wontons during the middle of play, just because he could. And he was really hungry, probably.

As told by environmental celebrity Huang Xiaoshan on his Weibo and relayed by Guangzhou Daily, Huang and a friend were playing golf on a course near Xiaotangshan in Beijing when they saw a helicopter fly overhead and land. The man who ordered the take-out was apparently the boss of a big company — a company that owns helicopters, it appears.

Did he at least wave those behind him to play through? We wonder.

One Response to “Chinese Boss Calls For Helicopter Delivery On Golf Course, Because He Can”