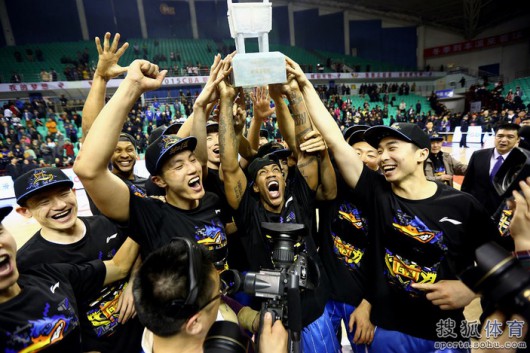 Don’t look now, but a basketball dynasty is blossoming in Beijing, and the only man who was brash enough to dream it — to, indeed, articulate that dream — was the pride of Coney Island, Stephon Marbury.

“I said we wanted to build a dynasty here in Beijing,” Marbury told reporters in the locker room following the Beijing Ducks’ series-clinching Game 6 win over Liaoning, 106-98, on the opponent’s court. “A lot of people said that I was crazy for saying that, but I believed in my teammates, I believed in Coach Min, I believed in the Beijing organization. We’ve done everything in our power to make this work. To be able to be in this light right now, I’m just thankful and I’m just humble.”

(Before that: “The real men will rise. The real men will rise. I just want to thank my God Jesus Christ for giving me the light to do all the things that I’ve been able to do. It’s been beautiful journey in Beijing, baby. They said I was old, they said I can’t play no more, the critics said I can’t do it no more — it’s all good. It’s all good, baby. Can I get my championship shirt, please?”)

Marbury — and I can’t emphasize this enough — was unstoppable all series, as he has been all postseason, as he has been all season, and every season in which he’s played in China. There were no tears this time, just a lot of joy and the relief of ending a season on top. The Ducks have now won three of the last four titles, including the last two.

Marbury again: “I want to say congratulations to Liaoning, those guys played a great season throughout the whole year, they’re a really good team, they’re going to be tough in the future, but the real men rose today, and that’s just all that happened today.”

The 38-year-old (!) guard was selected finals MVP, the first time he’s won the honor. (In the Ducks’ first title win in 2012, a rule prevented foreigners from winning MVP, though everyone knew Marbury deserved it. Last year, his teammate Randolph Morris earned it.) Here he is with his handprint plaque: 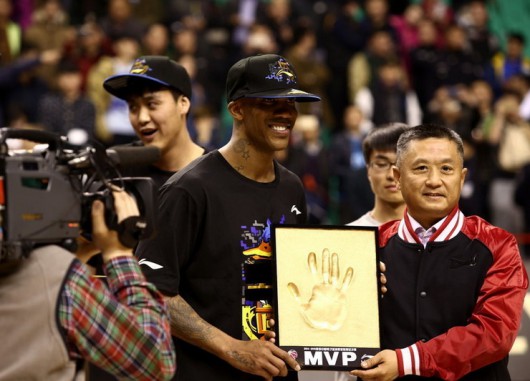 Check out the following highlight reel, in which Marbury goes Jordan on everyone. It truly has been a delight to watch: