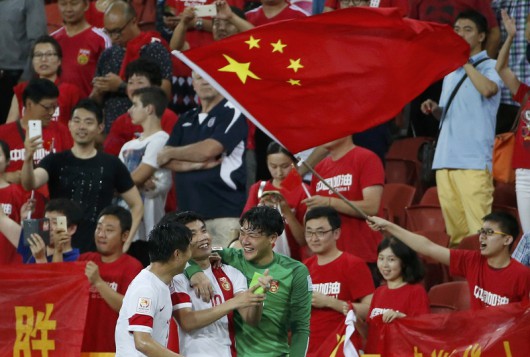 Some day, when historians write the story of the rise of Chinese Football — the team’s long path from national laughingstock to World Cup champion — they’ll point to this year’s Asian Cup as the turning point. More specifically, they’ll cite tonight’s game (7:30 pm* China time, 9:30 Queensland), during which a scrappy and young squad caught magic and upset the tourney hosts in a sold-out and raucous Suncorp Stadium in Brisbane.

Or China could lose 4-0 and we’ll forget them until the next ignominious flameout in World Cup qualifying. Either way, tonight’s game — one of the most anticipated international fixtures this country’s seen in a while – should be great! It could, in fact, be the most-watched game in Socceroos history.

For those who haven’t followed, China entered this year’s Asian Cup as basically an afterthought — it barely qualified, in fact — with the following quote, from China Sports Insider’s Mark Dreyer, being the most interesting thing anything could say about the team at this tournament:

Three group games later, China has the maximum 9 points possible and find themselves in the quarterfinals against the host nation, Australia. This is the first time China’s advanced beyond the group stage of the Asian Cup in 11 years, and as I told the Australian, Chinese fans have noticed:

I think it’s too early to say that Chinese fans are fully ready to embrace the national team, which has been a target of mockery, but it looks like the Chinese in Australia are warming up to them.

That could be an understatement. I was watching the Uzbekistan match in Beijing and the atmosphere looked incredible. It’ll be interesting to see whether the support carries over to China’s matches after this tournament concludes, but I tend to think it will. Fans gravitate to teams that play as hard as this current squad does.

A quick recap: in the opening game against Saudi Arabia, a 12-year-old boy helped goalkeeper Wang Dalei — who looks like a genuine star in the making — save a penalty kick…

…and then a fortuitous bounce resulted in a Chinese goal:

Talk about the smile of fortune. When the 1-0 score held up until the final whistle, China found itself atop a group that was suddenly looking very winnable.

Win it they did when they defeated Uzbekistan in the next game: a come-from-behind victory featuring two highlight-reel goals that have been replayed thousands of times on CCTV in the past week and a half:

The final game against North Korea was just icing. While Australia struggled and strained against South Korea in its final group match — losing 1-0 — China went through the motions, having already clinched first place. A 2-1 win certainly helps in terms of momentum.

Let us remember: China beat Australia 4-3 in 2013 at the East Asian Cup, finishing second out of four teams. Can they do it again?

Maybe that’s irrelevant. More valuable than any win is the hope that Chinese soccer has finally given its fans — real hope that the program is headed the right direction. So sit back and enjoy tonight’s match, soccer fans, because this is your reward from the sporting gods: a Chinese football game that matters.

* UPDATE: Well this was weird: Google and my Australian friends assure me Brisbane is two hours ahead of Beijing, and the AFC website clearly says the game begins at 9:30 pm Brisbane time, but… the game actually began an hour earlier. Who can you trust these days?

One Response to “You Should Probably Watch Tonight’s China vs. Australia Football Match”