Wang Dalei shouldn’t be too hard on himself for letting this ball go through, because… holy shit, Tim Cahill! 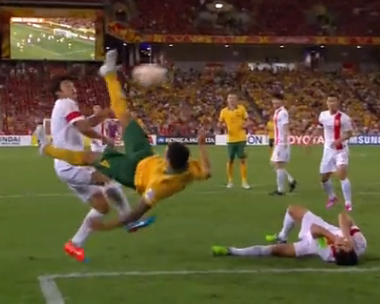 Logically speaking, all things considered, China has no reason to lament this result in what was its most meaningful soccer game in a long time. But they’ll probably look back and realize what a real opportunity they had to steal one. In the first half, China controlled more than 77 percent of possession, featuring an outstanding scoring chance in the 20th minute following a nifty build-up.

But Australia had its moments, too, and probably would have put one in if not for the brilliance of Wang Dalei in goal. One got the sense, watching, that it would require a flash of brilliance to break the deadlock.

And then… Cahill. The 35-year-old’s 49th-minute bicycle-kick goal gave Australia its first goal. He would add another, a header, in the 65th minute to give the Socceroos their final 2-0 margin.