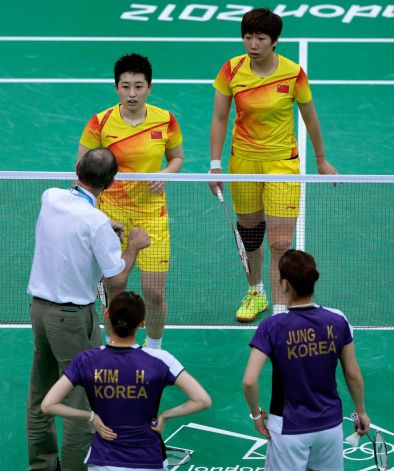 When the Badminton World Federation (BWF) announced yesterday it was disqualifying four teams from the women’s doubles competition for trying to lose, including the world’s top team, China’s Wang Xiaoli and Yu Yang, I have to admit my first reaction was fear that this would create more controversy than it would resolve. (Here are match “highlights.”) Would the conversation turn into a cultural discussion about how Asians are more apt to “game the system” instead of competing with this “Western idea” of “Olympic spirit”? (I hope we never see that argument, but it seems inevitable that someone will make it.)

I also happen to disagree with BWF. Athletes aren’t robots: they’re rational people who are capable of analyzing a tournament format and choosing to maximize their chances of winning. If that means throwing a match, who are we to step in and act offended, like, “How dare you introduce chaos into our perfectly tidy system?”

Anyway, it turns out the majority of Chinese fans disagree with me. Sina recently posted a poll that asked, “How do you feel about the suspected match-fixing badminton players being disqualified from the Olympics?” As of 7:45 this morning, more than half a million people had weighed in, and the conclusion is clear: 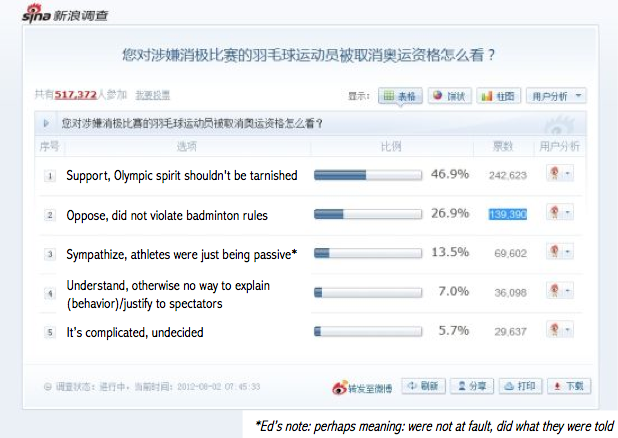 That’s 242,623 respondents — or 46.9 percent — who support the decision to disqualify the players. (Translations on the answer choices are mine.) By contrast, only 26.9 percent oppose the decision.

Chinese coach Li Yongbo recently issued a very straightforward and sincere apology for the team’s actions and not upholding the “competition’s spirit.” You can watch that here. He said because of the new rules this year — pool play is new; previous tournaments featured one big bracket, like in tennis — the team didn’t have a full understanding of the format. I’m reading a little bit into his answer here, but he thought — as he should have, I might add — the point of the pool play was to set the teams up for the best possible outcome in the elimination portion of the competition. Li comes off as a reasonable and articulate man, and the apology really was pitch-perfect.

Wang and Yu have also apologized on camera. Yu said they violated the Olympic spirit, and Wang vowed to compete her hardest from here on out.

UPDATE, 1:30 pm: Yu Yang announces her retirement on Tencent Weibo and speaks out against BWF, and a Chinese journalist reports that Yu and Wang’s decision to tank was influenced by a knee injury Wang sustained during warmups.