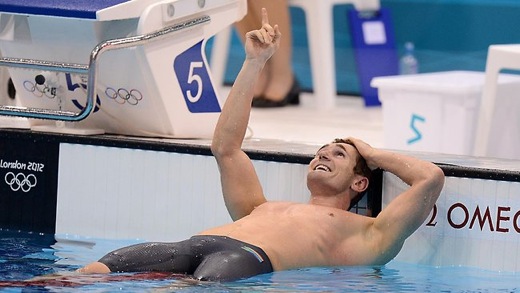 In an article published Saturday in the Sydney Morning Herald, South African Cameron van der Burgh admitted to cheating in his world-record-setting swim in the 100-meter breaststroke. Swimmers are only allowed one dolphin kick after entering the water and one kick after the turn, but van der Burgh copped to taking multiple — because “every swimmer does that,” he said.

“I’m not willing to sacrifice my personal performance and four years of hard work for someone that is willing to do it and get away with it,” he noted.

Whether you agree or not, knowing our culture of hand-wringing and insistence on moral and ethical conduct, this should have been a big deal, right? Everyone should have been talking about it? Instead, there has been radio silence across many major news outlets — not a peep from BBC, The Guardian, The Telegraph, Daily Mail. People who were falling over themselves to condemn the badminton players who purposely tried to lose — which isn’t cheating, by the way — have decided van der Burgh’s actions weren’t a big deal. Because…? Do you want me to say it, or are we on the same page?

Only yesterday did NBC bring itself to report this matter, and wouldn’t you believe it? It references the Badminton World Federation’s decision to disqualify eight players ex post facto. Quoting:

Although there’s no way for FINA to review the race at this point and make adjustments to the finishing order, there is some precedent from the IOC to do so. Eight badminton players were kicked out of the Olympics last week after they were accused of deliberately not trying during matches to give themselves a lower seed in the later rounds – effectively securing an easier trip to the finals.

Just like the badminton case, the van der Burgh incident is a fair play issue. Since the race happened over a week ago, however, it’s looking less and less likely that the IOC will take any action.

Slate wrote about this incident on Tuesday, and noted, “It’s hard to blame the swimmers for dolphin-kicking up a storm. As with any other performance enhancer, the idea that the guy in the next lane is cheating exerts pressure to do it yourself, lest you drop out of medal contention.” Oh, so then it’s okay to cheat when other people cheat? So when Yu Yang and Wang Xiaoli looked across the floor before their final, meaningless group play game and saw that their South Korean opponent wasn’t even warming up, and decided they would throw the game because their opponent had every intention of doing the same… that’s okay too, right?

I don’t want to belabor my point. I’ve made it again and again, and you’re sick of hearing it. But I do want to hear from all you sticklers for the rules who made yourselves known around these parts recently. Van der Burgh broke the rule. What of it, should he be stripped of his gold medal?

My feeling is no — but then again, I thought the four badminton teams never should have been disqualified. It’s just that once you start ruling with an iron hand, it becomes increasingly difficult to relax your grip. Once you do, the questions arise, as do the accusations of hypocrisy, and racism, and thus begins the unraveling of your authority.

9 Responses to “Hypocritical, Much? Swimmer Admits To Breaking The Rules But Gets To Keep His Gold Medal (Yes, We’re Still Angry About Badminton)”