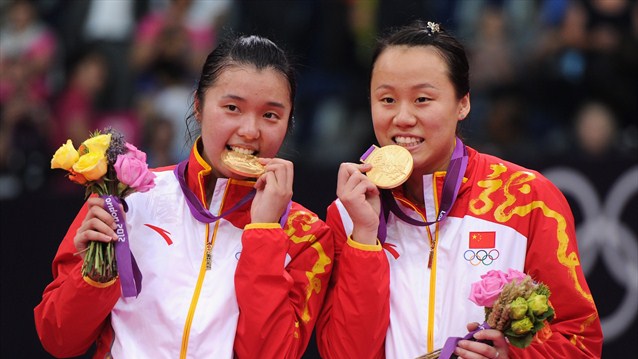 Yu Yang and Wang Xiaoli were disqualified for match-fixing because they wanted to avoid facing Tian Qian and Zhao Yunlei in the semifinals, and now we know why. Tian and Zhao just won the gold medal, never dropping a set in any of their three knock-out round matches. They beat Japan’s Mizuki Fujii and Reika Kakiiwa 21-10 25-23.

One wonders how Tian and Zhao ever lost in the group stage. You’ll recall that it was their defeat to Denmark’s Kamilla Rytter Juhl and Christinna Pedersen that precipitated the match-fixing scandal, as no one — least of all their countrywomen, who beat them in the finals of last year’s World Championships — wanted to face them before the gold-medal round. (In case you were wondering, Rytter Juhl and Pedersen lost in the quarters to Fujii and Kakiiwa.)

We won’t take this opportunity to point out that the Badminton World Federation got its wish to see a non-East Asian team win a medal, nor address the theory that it disqualified four Asian teams for trying to lose — including two teams that actually won – to promote the sport in Europe. But we will point out that a quarterfinals featuring only one non-East Asian team was manipulated so that there were suddenly five. So, congratulations, Valeria Sorokina and Nina Vislova, Russians, for beating Alex Bruce and Michele Li, Canadians, for the bronze.

3 Responses to “After Much Ado, China’s “Other” Badminton Team Won The Women’s Doubles Gold”