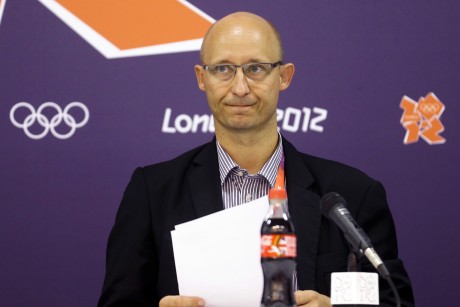 Was a note proving injury all that was required to get the world’s No. 1 badminton team of Yu Yang and Wang Xiaoli reinstated after their high-profile disqualification for match-fixing (and the DQs of three other teams)? I’ve emailed Thomas Lund, t.lund@bwfbadminton.org, and the Badminton World Federation (BWF) to find out, and will report back if someone replies.

I ask on the heels of a recent controversy involving Algerian long-distance runner Taoufik Makhloufi. Yesterday, he tanked his 800-meter qualifying heat — intentionally losing — in order to conserve energy for his 1,500-meter race, for which he ran the fastest overall time in a semifinal heat on Sunday. But the International Amateur Athletic Federation (IAAF), as draconian as the BWF, decided to kick him out of the Games for not giving “a bona fide effort,” with one caveat:

The IAAF spokeswoman said he could be reinstated for Tuesday’s 1500m final if he could get a medical certificate from a local doctor.

Lo and behold, a few hours later, according to Reuters:

The Algeria team, upset that the IAAF had not spoken to Makhloufi, said the athlete had a knee injury and the decision was later reversed on medical grounds.

“After reviewing evidence provided by the LOCOG medical officer, the disqualification of (Taoufik Makhloufi) from further participation in the athletics competition of the 2012 Olympic Games has been revoked,” the IAAF said in a statement.

A knee injury. Hmm. That’s funny, because that’s the exact type of injury Wang Xiaoli reportedly sustained, causing her and teammate Yu Yang to not perform at their best in their final, worthless pool-play game.

Olympic rules really are the best: Depending on the sport, when athletes try to compete by not competing, it’s either within the rules or something that won’t be tolerated. And some of those who are punished still get to continue, so long as they “prove” they were injured. Makhloufi’s 1,500 final is tomorrow. Provided his knee somehow holds up.

BWF: waiting on you.