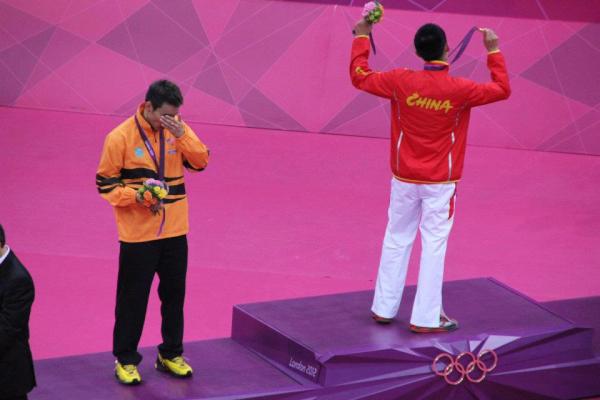 China’s Lin Dan beat Malaysia’s Lee Chong Wei 15-21, 21-10, 21-19 earlier today, becoming the first person to repeat as Olympic men’s badminton champion (he also beat Lee in the 2008 finals). That in itself could establish him as the best male badminton player of all time, but then you consider his 48 career titles, including four World Championships, and it’s apparent that he’s a once-in-a-generation player. And at only 28, he’s far from done.

But equally indisputable: Lee Chong Wei, who’s either 29 or 30, depending on how you count these things, is the world’s second best shuttler. It’s just unfortunate he’s Lin’s contemporary.

The match today was a gripping affair that saw Lin drop the first game and go down 8-5 in the third. In a pivotal moment, the head judge nearly botched a call, as his vision was obstructed on an out-of-bounds call. Lin protested, the officials reviewed, and the initial call was overturned. Instead of 9-5 to Lee, it was 8-6, and Lin scored the next three to pull ahead. From there, though, neither player gained more than a two-point advantage until the end, with Lee actually twice leading by two, 15-13 and 18-16.

Lin tied it back up, but the Malaysian rallied to regain a one-point lead, 19-18. With the finish line in sight – he was set to become Malaysia’s first-ever gold medal winner — Lee appeared to lose his nerve, at least momentarily. After a long rally, he misjudged a shot flying toward the far line, hoping it would go out. It wasn’t really close. With the game tied again at 19, Lin seized the moment and scored the next two to win.

Both athletes were gracious afterwards, as expected, considering they’re longtime friends. Lin invited Lee to his wedding, and said about him, “He’s such a brilliant rival that I am quite lucky. I treasure the opportunities of playing him.” And Lee said about Lin: “It was very hard to beat Lin. There is just one Lin Dan in the world and he is great.”

Lee, who collapsed in tears after the final game, had a tweet sent out via his official Twitter account saying, simply, “I’m sorry.” Malaysia would have none of it, quickly showering him with support (and retweeting that two-word message 10,838 times in less than six hours). We’ll end this post on that note — we can understand the joys of winning, but of feeling you’ve let down a nation, only to be propped back up and told you single-handedly brought together 28 million people? That’s a narrative only the Olympics can bring us, and the reason we watch.