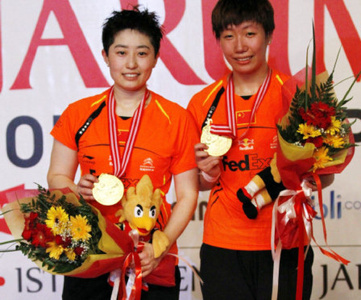 Yu Yang and Wang Xiaoli, who were robbed of their chance to compete for a gold medal at the London Olympics when the Badminton World Federation disqualified them (and three other teams) for intentionally trying to lose, were honored by the China’s General Administration of Sports on Friday.

Yu and Wang were among 100 players to receive “sports honors medals,” according to Xinhua.

The pair’s match-fixing scandal in London made their inclusion of the annual awards into doubt, but China’ s sports official emphasized that the sports honor medals were established for Chinese world champions – winners of Olympics, World Championships, World Cup in the year – and their coaches.

Yu and Wang entered the Olympics as the world’s top-ranked team, but a shocking loss in group play compelled them to make the strategic decision to tank in the final pool-play game, which would have determined seeding but little else. Seeking to avoid setting up a semifinal matchup with their countrywomen, Tian Qian and Zhao Yunlei, Yu and Wang intentionally lost — but only because their opponents from South Korea failed to lose better, since they were trying to tank as well.

It resulted in one of the most controversial decisions in the Games: four teams were disqualified from the knockout stage of the tournament. Tian and Zhao cruised the rest of the way to win gold.

Controversial women’s badminton duo honored by China’s sports governing body (Xinhua) (Photo via AP, after Yu (left) and Wang defeated Tian and Zhao at the finals of the Indonesia Open on June 17, 2012)