We're not sure whether Liu Yuxi is a certified reporter, but she's been assigned to CCTV studio commentary for this year's World Cup, and judging by her Sina Weibo account, she appears to be a huge homer for front-runners and generally popular teams such as Portugal, Brazil, and Argentina (Messi, specifically). But Ms. Liu saves her true passion for Italy, which we know because -- donning the Azzurri blue -- she broke down and sobbed on live television tonight following Italy's 1-0 loss to Uruguay.

Either Tim Duncan's got his game face on or he's been flash-frozen inside a TV graphic and desperately needs your help. 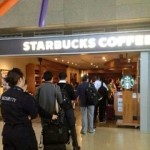 Those ever-vigilant consumer-rights watchdogs over at China Central Television were at it again this week, directing the full fury of their state-backed bite against Starbucks in a seven-minute hit piece on October 20. What got CCTV's proverbial underpants in such a bunch? 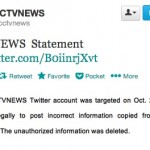 "Targeted" is the new "hacked," thanks to CCTV News, which issued this statement via Twitter at 9:33 this morning: