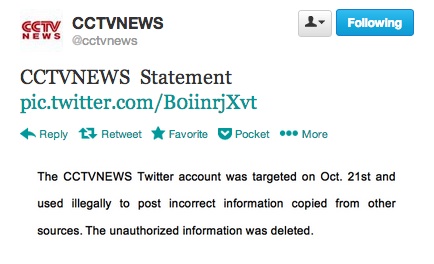 “Targeted” is the new “hacked,” thanks to CCTV News, which issued this statement via Twitter at 9:33 this morning:

CCTV News is referring to this tweet sent yesterday evening about Zhou Yongkang, a former Standing Committee member believed to be under investigation for corruption. The “other sources,” presumably, is SCMP, which ran an article — accuracy unverified, considering its unnamed sources, etc. — stating Xi Jinping has set up a “special unit” to carry out its Zhou probe.

There’s a lot going on in the latest CCTV News tweet, so let’s parse a little.

The reason so many people — celebrities and athletes and politicians, mostly — say they were “hacked” is because hacked is such a vague term that it covers all scenarios, from a friend snatching your phone and sending a tweet to an actual hacker breaking into your account (the latter rarely happens; at best, fools get phished). But “targeted”? Sounds outright conspiratorial. Devious agents slink betwixt cubicle shadows in CCTV’s office.

“Used illegally” also raises some eyebrows. It’s gratutious phrasing, isn’t it? After all, we all know that spreading incorrect information on social media equals JAIL TIME. Anyway, if you offend official state media, of course you’re breaking the law as well, which everyone knows.

Finally, it’s so like state media to use the term “unauthorized information.” There are no universal truths in the world they live in, no “facts.” There is only that which is authorized — a reality forged by the sheer will of propagandists and harmony architects — and that which is not. God have mercy on those who insist on believing the latter.