Peter Ho, a popular Taiwanese-American actor and singer, is successful and rich enough that he probably doesn’t need to supplement his income by selling out favors to companies like CCTV, but then how would you explain this? 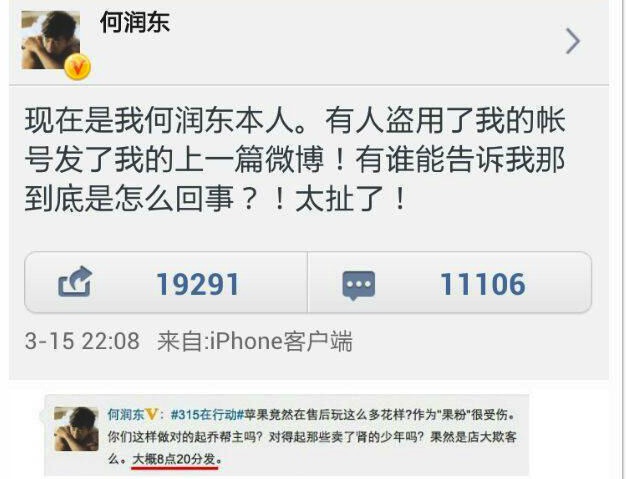 Check out the bottom message, posted on Sina Weibo just after 8:30 pm, according to SCMP. Pay especially close attention to the final sentence, bolded for emphasis:

We wonder how much CCTV paid him to do this. He has more than 5.4 million Sina Weibo followers, which means he’s particularly adept at spreading messages — even if they aren’t his.

Unsurprisingly, Ho (@herundong) has claimed he was hacked:

Now it’s me in person. Someone stole my Weibo account and posted the previous Weibo. Will someone tell me what’s going on? This is ridiculous!”

But that absolutely is stupid. He’s claiming that a third party hacked his Sina Weibo account and the best thing they thought of doing was ripping on Apple products while planting a clue that CCTV might have been involved?

Why didn’t Ho just say he wrote a reminder-to-self?

(Also, will someone tell him what’s going on?)

This is relevant because CCTV recently published an expose on consumer rights, and took the bold step of criticizing Apple. Met only lukewarmly, CCTV apparently has begun its own viral campaign to make it seem like the public is on their side. But netizens have sniffed it out. Ho’s claim to being hacked has been forwarded more than 100,000 times since he posted it on Friday night, and most of the 17,000 comments are critical of him.

Apple, for its part, hasn’t fashioned much of a response.

“You can tell the good from the bad easily,” its Weibo post said.

2 Responses to “Did CCTV Buy Out Taiwanese Actor Peter Ho, Among Others, To Publish Weibo Post Criticizing Apple?”