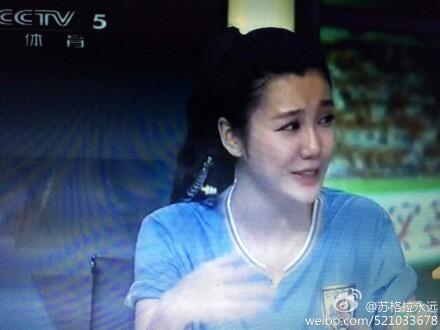 We’re not sure whether Liu Yuxi is a certified reporter, but she’s been assigned to CCTV studio commentary for this year’s World Cup, and judging by her Sina Weibo account, she appears to be a huge homer for front-runners and generally popular teams such as Portugal, Brazil, and Argentina (Messi, specifically). But Ms. Liu saves her true passion for Italy, which we know because — donning the Azzurri blue — she broke down and sobbed on live television tonight following Italy’s 1-0 loss to Uruguay. 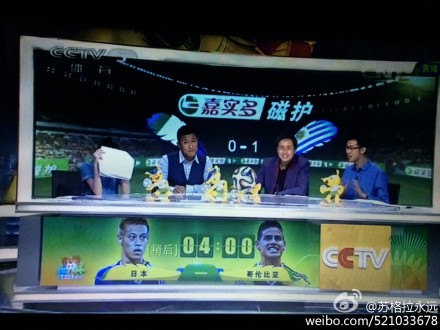 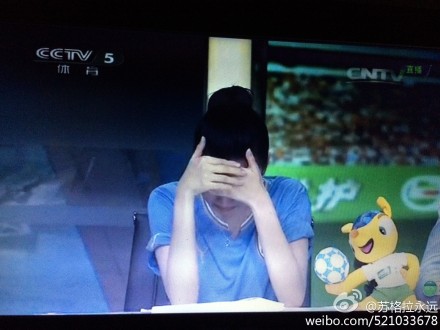 Unlike English football fans, we take no particular joy in watching the suffering of others. We’re just shocked that Liu’s sports-watching heart hasn’t already been hardened to the cycle of hope and heartbreak that is sports in general and soccer in particular.

The worst part about the above segment, by the way, was her male colleague attributing her emotional outburst to being a “female.” I don’t have the exact quote at this moment, but he said something along the lines of, “That’s the female disposition for you.”

Hopefully we can update with video when it becomes available.

UPDATE, 12:43 pm: Video is below. That music, by the way, was not added by some cheeky uploader; CCTV cued it up mere minutes after the game ended. It featured lots of violins.

We should point out that the Chinese — and much of Asia, actually — have a long history of rooting for Italy, likely attributed to how well many Serie A club teams have marketed themselves in this market.

And eight years ago, we saw a similar incident of a Chinese journalist openly rooting for Italy in the World Cup. Here’s Jeremy Goldkorn writing in Danwei in 2006:

During last night’s live broadcast of the Italy – Australia football World Cup game, CCTV’s announcer Huang Jianxiang (黄健翔) got rather excited, and took sides with the Italians, saying things like “Don’t give the Australians any chances!” and after Italy won, “Long live Italy!”

There’s a video of that, too.

Today Chinese blogs are castigating Huang, accusing him of gravely insulting Australia and being a disgrace to Chinese football fans.

We wonder if fans will be more forgiving to Liu Yuxi because, you know, of the female disposition and all.