First, a little background. Top Chinese pianist Li Yundi and Chinese American singer Leehom Wang are best buds who spend so much time together that people openly question the nature of their relationship. (The two have repeatedly said they’re not gay lovers.) It’s kind of a running joke, the sort that feeds gossip mills and keeps tabloids in business.

On Saturday night, Li took the stage in Beijing for a magic act with Lu. The plan was simple: Li would play the piano behind a curtain, and Lu would “disappear” him. Meanwhile, young viewers would swoon, and CCTV would placate critics who call its Spring Festival Gala outmoded.

It didn’t turn out to be so straightforward, however. At the 2:20 mark of the above video, watch as Li stops playing and pokes his head out from behind the curtain. Perhaps this was part of the script. Then again, perhaps it’s here that CCTV producers break into a cold sweat.

Lu goes over, and Li whispers something in the magician’s ear.

It takes the audience a second to process the joke, but then the gasps and squeals of delight come cascading down.

Lu breaks into laughter, then says, “Sorry, sorry.” Li retreats back behind the curtain, and the act continues. Lu pulls on a rope, and not only has Li disappeared, but he’s standing in the middle of the audience. Applause all around. “Lu’s joke immediately became a hot topic discussed by netizens across China, with many calling it the best part of the entire gala,” reports SCMP.

You know who hated it, though? China Central Television, which excised the Lu-Li exchange from its reruns.

Homosexuality in China remains a sensitive topic in the state media and discussions about it are suppressed. So, it was no surprise that when the Gala was repeated the next day, the scene had been removed.

Anxious to disassociate itself from the joke, the gala’s official weibo account posted a statement saying, “Lu Chen’s joke about Li and Wang was not planned by the producers, but rather an impromptu act by Lu.” The gala’s chief director Ha Wen later confirmed the statement in an interview.

Li also said it was impromptu, but Lu, on his Sina Weibo, refused to play along. “Everything we said on stage was agreed by both parties. Come on! Be honest,” he wrote. 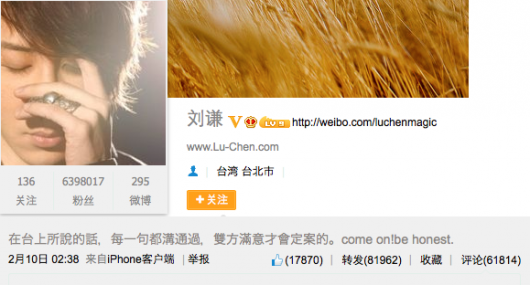 It was rumored that Leehom Wang confronted Lu backstage and slapped him, which seems ridiculous at face value. The two had some fun with this.

Wang wrote on Weibo, “Lu Chen, did anyone assault you? Does that person look like me?” To which Lu replied, “I think I was hit so hard that I lost my memory. I can’t remember this. What should I do?”

Good for everyone involved. In America, after an incident like this, the public would cackle and we’d all await the inevitable commercial or Saturday Night Live sketch involving the three. In China, however… perhaps we’ll not see Lu in another national Spring Festival gala for a while.

Not that that’s a bad thing. Regional Spring Festival galas have risen in visibility (thanks to the Internet) and popularity (thanks to CCTV’s own antiquated show) in recent years, as evidenced this week by the Backstreet Boys on Liaoning TV and PSY on Dragon TV. Meanwhile, CCTV’s production is stuck in the 1990s. “The Spring Festival Gala is a cultural legacy from the colletivism and group identity of socialism after China was liberated,” so goes a Southern Metropolis editorial from 2007, as translated by ESWN. “But following the changes in Chinese society today, this model is increasing[ly] more difficult to realize.”

Performers like Lu, Li, and Wang, with the goal of entertaining – what a revolutionary concept, right? — can help bring back this tradition, if only authorities will let them. There’s nothing wrong with collectivized entertainment, as the Super Bowl teaches us each year. There is something wrong and downright repulsive, however, about an entity imposing its narrow, blinkered idea of collectivism on all of us.