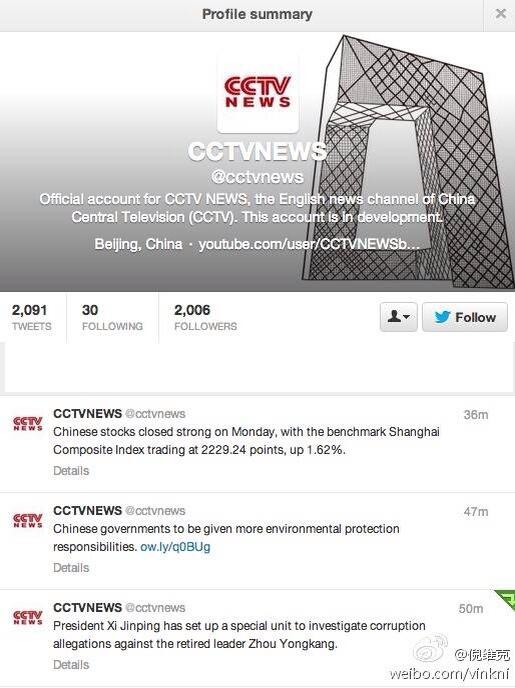 As reported last month, former security chief Zhou Yongkang, now retired, has been the target of high-level corruption probes since at least late August. “How far and high is [Xi Jinping] willing to go to clean up China’s political elite?” the New York Times’s Chris Buckley asked in a September 25 article.

Beijing police chief Fu Zhenghua will report directly to Xi, according to police and graft watchdog sources. Fu is the first person in the party’s history to also hold the concurrent posts of head of Beijing’s armed police, the Standing Committee member of the party’s Beijing municipal committee and deputy minister of public security.

And then, predictably, it was unconfirmed, as the tweet was deleted — just as Western journalists were spitting out Coca-Colas* en masse onto their keyboards.

Now you see it, now you don't: @cctvnews has deleted Zhou tweet

“Why deletion?” is probably the less interesting of the two questions we can ask. There seem to be many good ways to break a story about an unprecedented investigative unit for a former Chinese leader who happened to be of the most powerful and divisive figures on the Politburo Standing Committee; Twitter is not one of them.

So @cctvnews has deleted and de-confirmed the tweet on Zhou Yongkang being investigated. Was the tweet the mistake of an intern?

What if @cctvnews was tweeting the Zhou Yongkang info from a 内参?

It’s unlikely we’ll find out. But this seems like a reasonable bet:

Although you should probably start following the Twitter accounts of state media anyway, just in case. There must be a whole bunch of interns there, always a click away from making news.

(Above image via George Chen)