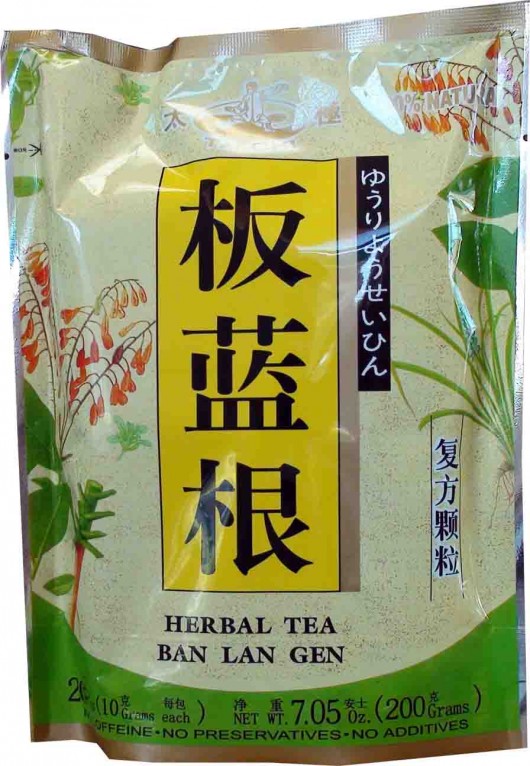 [Disclaimer: This post was supposed to be about my general experience with the medicine banlan'gen. However, I just finished a course on traditional Chinese medicine and couldn't help presenting the results of some quick research.]

It really is amazing what people believe: A few years ago, everyone started eating eggplant after a quack TCM doctor said it was the new panacea; after the Fukushima meltdown, iodized salt was sold out as people rushed to prevent radiation poisoning, never realizing that iodized salt contains such miniscule amounts of iodine that you would first die before getting enough into your system; and now, after several provincial health authorities recommended it to prevent H7N9 infections, people are rushing to buy the traditional Chinese medical remedy for colds and flus, ban lan gen (板蓝根, sometimes rendered as banlan’gen).

While the World Health Organization has been quite positive about the Chinese government’s response to the outbreak of the newest avian flu, the Chinese people themselves remain skeptical. Certainly when officials recommend a treatment with no scientific backing, we really do have to question whether these people know what they’re talking about.

Ban lan gen has been around for quite a long time. The first recorded mention of it comes from the Huangdi Neijing 黄帝内经, written sometime between the late Warring States Period (475-221 BCE) and the early Han Dynasty 206 BCE – 220 CE), where the author(s) recommend it as an anti-viral and anti-bacterial treatment:

It can prevent disease when there is none. When there is disease it can treat it… It eliminates toxins from the body, boosts the immune system, fights bacterial and viral infections, and balances yin and yang… It clears heat, but does not damage the Spleen and Stomach.

However, as you can quite imagine, germ theory did not exist at this time. When they say “bacterial” and “viral,” they really mean something very different. It wasn’t until Mao Zedong declared that Chinese and Western should be integrated that physicians began to prescribe ban lan gen for colds and flus.

In the vocabulary of Chinese medicine, most types of colds and flus are usually caused by Wind entering the body. Amazingly enough, in pre-modern TCM, it is recommended that people NOT take ban lan gen for Wind-type “pathogens,” as it might actually worsen the condition.

In and of itself, ban lan gen, of all Chinese medicines I’ve tried, has to be the easiest to drink. Most commonly sold as a pellet/powder, it dissolves easily in hot water and tastes almost sweet. Current Chinese wisdom says that you should take it as soon as you start experiencing cold or flu symptoms, as it’s best as a preventative measure. Much of this can be explained by its marketing as an anti-viral and anti-bacterial treatment, since actual TCM doctors will not recommend this for their patients suffering from a cold or flu. (It is good for, however, for sore throats, as it can help clear “heat,” i.e., inflammation and infection.)

Given all this, it’s completely stupid and irresponsible for health authorities to recommend this nostrum, and even TCM says you shouldn’t take it for ANY flu, much less in the case of a swine or avian pandemic.