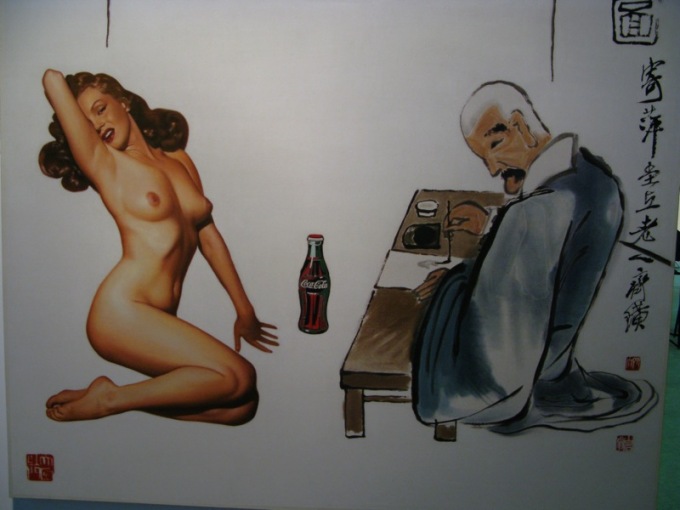 Qi BaiShi vs. Marilyn Monroe, by Zhang Wei (via The Grand Narrative)

Two weekends ago, our mouths overflowing with Lantern Festival sesame-injected sweet rice balls, a Chinese art historian asked me why Americans don’t buy Guohua (国画).Guohua is the National Chinese painting style that Westerners all know from the animated opening credits of Mulan. It also encompasses the significant majority of art purchased by Chinese people. “So, do you think Americans don’t buy Guohua works because they don’t understand them?” I may have dribbled a little as I tried (but perhaps failed) to configure a concise response. No, actually Americans are known for buying only art they don’t understand.

I was confronted with a pair of raised bushy eyebrows and a brow as furrowed as a newly ploughed rice paddy. “Why would you buy art you don’t understand?” Because it proves intelligence and culture, of course. Americans buy things they’ve heard about and don’t understand – but don’t want to admit they don’t understand. Art is the totem of the highfalutin for cultural superiority. Thus we have richey-rich people who reside in humorless empty-walled mansions (the 1%) who run around to buy a Neo-Pop Jeff Koons they can’t tell from a Rodin. That Koons’s balloon dogs and balloon monkey head prints still provoke buying sprees is the artist’s great long-running practical joke, a subtle and brilliant way to mock the well-heeled, well-disguised philistine. With all due respect, this sort of art production and promotion is the lifeblood of the Western art world. Take Damien Hirst as the current example. Polka dots should get you only so far. Please, let’s go back to the menagerie in tanks era. 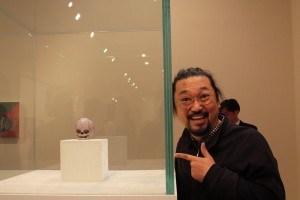 Hirst does, however, get points for successfully snubbing the system. Well, more accurately, he is the system. I raise my glass to the man who makes mountains of money by selling work that I doubt even he considers to be art.

To bring this back to China: the Asian art auction system is filled with Chinese buying paintings that represent their – stop me if you’ve heard this phrase before – 5,000 years of culture. This is partly a nationalistic approach, but also an interesting return to Guohua from the strictly Social-Realism oil painting of the Mao era. It also seems incongruous with the neo-kitsch found in 798 that is being eaten up by foreign collectors. In recent years, and with the surge of money in China, the auctions also show a lot of brand-name tailgating. This was evident this past summer at Louis Vuitton’s “Voyages” show featured by the National Museum in Beijing. For those of you who didn’t see it, there were two highlights: the travel trunk designed by Japanese Superflat painter Murakami for holding your 50 rainbow-colored Louis Vuitton handbags, and, well, yeah, pretty much just that. 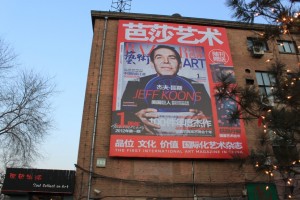 In case you ever doubted Koons's brand status, here he is on the cover of "the first international art magazine in China," prominently displayed in Beijing's 798 Art Zone.

Chinese people buy what they know. Brand names like LV are known entities. Guohua is too. Chinese art collectors don’t know what to do with a canvas entirely painted black. But who’s to blame them?

Bringing it back to America, now…

How much time does the average Metropolitan Museum visitor spend examining a Pollock (i.e. squiggly lines)? And then how much time does he or she spend looking at a Chinese painting of mountains and rivers? (In this hypothetical we are excluding “experts” and “sinophiles,” and assuming that people spend more than a few seconds looking at any work of art, and that this theoretical art-goer wanders into the Asian Wing in the first place.)

China buys the understandable, and America buys the incomprehensible. But at the root of it, China and the US aren’t so different. After all, Pollock is just another brand name.

We’ll come back to that another time. 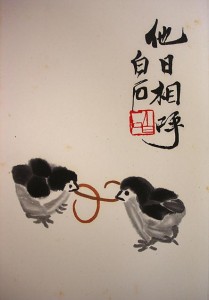 One of those Chinese artists that Americans don’t buy is Qi Baishi (齐白石, 1864-1957).  Some foreigners may have actually heard of him when his Eagle Standing on Pine Tree; Four-Character Couplet was sold at auction last year for $65 million. Qi Baishi is arguably one of the most accessible Chinese Guohua painters for the Western palate. His paintings of googly-eyed ducks, bugs, and drunken monks are more true to life than a hundred flowery contemporary social-realist paintings of pretty, naked, possibly underage girls (or Marilyn Monroe, top) surrounded by birds (which can be seen from time to time at the National Art Museum of China). His paintings are simple, concise, and free of frivolous ink washes and itty-bitty temples on the mount. Instead, his focus is the simplicity and truth of life. We are all the same, from humans to shrimp. His piece Studying at Night shows a young boy slumped over his notebook, asleep at his desk. Tongue in cheek was never this good.

He was among a set of Guohua painters including Huang Binhong and Pan Tianshou who were around both before and during Communism in China. At the onset of Mao’s reign, traditional painters were lectured to at Yan’an and given the option of either following the rules or being consigned to hard labor. Qi chose the former, becoming one of the most prominent painters of the traditional style adopted by the Communist Party as artistic harbingers of New China.

But I don’t want to imply that politics has got anything to do with anything. Qi Baishi’s paintings are timeless. Go look at them.

Can one throw shit against a wall and call it art?

Yes. One can, and one does. That’s actually how most artists get away with illegal acts in a public and foolproof manner. (Can’t touch this.) Most often it’s paint (especially if you consider the floor to be a horizontal wall, making Pollock a perfect example). In 1995, Ai Weiwei, the big guy, photographed himself dropping Han Dynasty vases on the ground (these photos are perfectly stunning). David Hammon in 1981 threw 25 laced-together pairs of shoes on top of Richard Serra’s Tilted Arc. Oh yeah, then he urinated on it. So, yes, I would say one can throw things and call it art.

Speaking of urination: A few years ago, students at the Maryland Institute College of Art, one of the foremost art schools in the US, were banned from using bodily fluids in art projects. The ban was imposed after a student threw a jar of his own piss at the wall behind his classmates as a performance piece during a class critique. A golden shower is normally not a good way to treat your critics.

In terms of artists throwing things: As has been said about artist Luk-Khang, “She is likely to pick up and throw things at people she doesn’t like.” This is an apt description, and actually more critical than anything I’ve ever seen written about a contemporary Chinese artist (which says a lot about the state of art criticism in China).

And of course, bringing ourselves to the flabby underbelly of Pop, we had Sarah’s Smash Shack of San Diego, a place where people could pay and suit up to hurl beautiful breakables at metal walls to unwind. Sadly, it is no longer in existence.

Lola B is an artist in Beijing. She can be reached at lola@beijingcream.com. Yishu (pronounced eeshoo) means “art.” There, now you know. |Yishus Archives|

3 Responses to “YISHUS: The Inaugural Column About Art In China, From A Real Artist In Beijing”