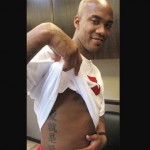 Of course he does. He's going to be the coach of Chinese basketball someday, after all. "Love is love," it says. 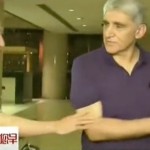 Panagiotis Giannakis, former head coach of the Greek basketball team, arrived in May to begin a four-year contract to lead the Chinese basketball team through the 2014 FIBA World Championships in Spain and the 2016 Olympics in Brazil. As of this writing, however -- following a blowout loss to Chinese Taipei in the quarterfinals of the FIBA Asia Championship two weeks ago -- it doesn't look like Giannakis will survive the month. 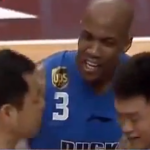 The CBA might have a flopping problem. Tianjin's flopping against Qingdao last week was a big reason that game got so out of hand, and on Friday, we saw another incident involving one of the league's high-profile players. Watch as Guangsha guard Zhang Hanjun starts bleeding perilymph from his ear upon bodily contact with Beijing's Stephon Marbury. Who comes out of this looking good? 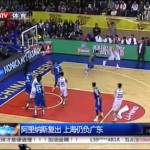 This weekend has not been good to Tracy McGrady. On Friday he suffered the indignity of having to run off the court because of diarrhea — to say nothing of the indignity of a 10-point performance in a 30-point home loss. Yesterday in Beijing, against the defending champs, he was involved in what could have been... Read more »

Allen Iverson and Jason “White Chocolate” Williams were among the more famous basketball players in Beijing on Saturday to take on the defending CBA champs in an exhibition at Beijing National Stadium. (No Dennis Rodman this time.) The Ducks beat the American “All-Stars” 132-103, but all anyone could talk about afterwards was the “juke” that... Read more » 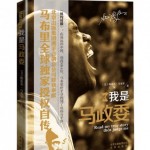 Fans lined up around the massive Zhongguancun Book Mansion this morning to see their favorite athlete, Stephon Marbury, conduct a book signing for his ghostwritten autobiography, I Am Commissar Marbury (I only assume it’s ghostwritten because it’s in Chinese). Marbury, who had been in the US for foot surgery, returned to Beijing on Thursday with his... Read more » 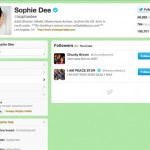 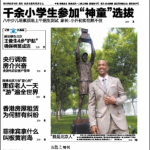