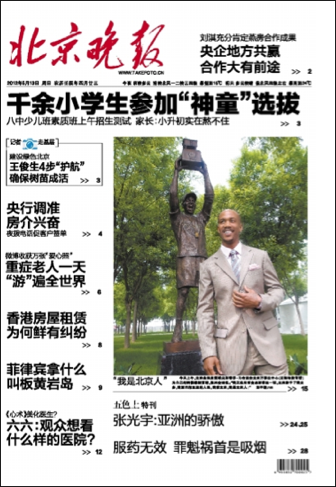 I hope I’m not burying the lead here, but he also has his own life-sized statue. Stephon Marbury does. A bronze effigy.

When we glimpsed it earlier this month, I speculated over where it would be placed (surely in Tian’anmen, next to the Monument to the People’s Heroes), but now we know for sure: on Sunday, the statue was officially unveiled on the lawn of the MasterCard Center, aka Wukesong, where the Beijing Ducks clinched their first-ever CBA championship a month and a half ago. Marbury attended the ceremony with many of his teammates.

Ducks fans — disappointed that the Coney Island native could not officially win the regular season or finals MVP award because he’s a foreigner (he undoubtedly would have captured both) — rallied to make sure he received at least a token of their gratitude… in the form of immortality. At the award ceremony, according to Beijing News (so take it with a grain of salt; this was the organization, after all, that lifted an article from The Onion reporting Congress was moving out of DC), Marbury said, “I don’t have words to describe all this, Beijing has given me so much, I want to return the favor to the people here, I love Beijing, I love Beijingers!”

Then he went onto Twitter to thank God for the thirty-fifth thousand time that day and, in reply to someone telling him “You in da right place!”: 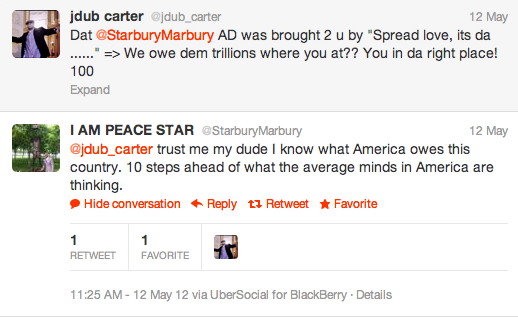 As a Beijing Ducks fan, I’m happy for Marbury and all that he’s accomplished this season playing basketball. Let’s hope the success doesn’t go to his head — lord knows we don’t need him tweeting about politics and religion. 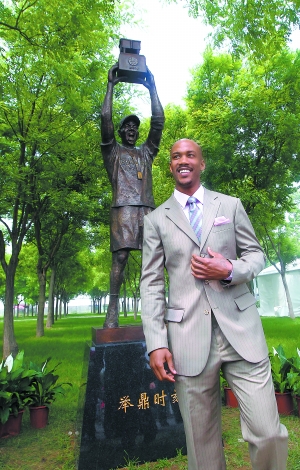 6 Responses to “Stephon Marbury Unveils His Statue In Beijing, Then Tweets About America’s Debt To China”