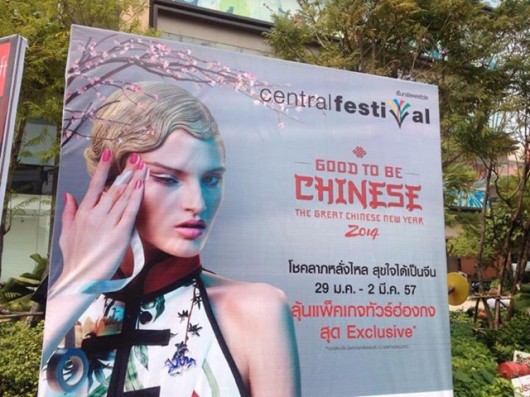 Racist billboard in Bangkok, via Kotaku

Sorry about missing Monday’s links. It was a public holiday in two countries, after all.

Half-Asian writes candidly about his physical insecurity. “But as I have moved through 32 years of looking at myself in the mirror, a time in which the vast majority of interracial couples I have known have looked nothing like my parents, I have come to see their love as something rare. Most men in interracial couples I have encountered do not look like my dad. They do not have his skin tone, or his combination of dark hair and dark eyes. My mom often tells me stories about when she began dating my father in suburban New Jersey in the 1970s, and I could only infer from her stories that her predominantly white community felt confused and unsure why a white woman would find an Asian man attractive.” (NPR)

On China’s mistresses. “Shanshan’s $550 shoes came from her lover, but the soles of her feet, as hard as leather, came from her childhood. ‘We used to play barefoot in the village,’ she told me. ‘All the girls in the karaoke bar had feet like this.’ // At 26, Shanshan has come a long way from rural Sichuan, one of China’s poorer southern provinces, famous for the ‘spiciness’ of its food and its women. Today her lover, Mr Wu, keeps her in a Beijing apartment that ‘cost 2.5 million yuan ($410,000)’, and visits whenever he can find the time away from his wife.” (James Palmer, Aeon Magazine)

I still haven’t watched this year’s. “For a live television event with a stunning 700 million-plus viewers, the New Year’s gala on China’s Central Television (CCTV), the country’s largest station, has surprisingly few true fans. As has been the case since the first gala aired in 1983, Chinese celebrated their main holiday, the Lunar New Year — which fell on Jan. 31 — by sitting down to watch a show that fuses Super Bowl-style hype, the performances and breathless people-watching of the Grammys, and the comedy of a skit show.” (Tea Leaf Nation)

Corollary: Luckily, someone did. (Granite Studio)

Apt. “Tomorrow will be the year of the horse. If you are Chinese or learning Chinese, you’ll know that we love to say all these auspicious well-wishes. But if you wanna go an extra mile and sound like you’re totes eloquent, here’s a list of phrases with the word “horse” in them. Here goes…” (Fuck Yeah Chinese Myths!)

Shudder. “A woman cut off her boyfriend’s penis in Minhang District early yesterday as she suspected he was going to dump her, xinmin.cn reported. // The woman, surnamed Tu and about 30 years old, is some nine years older than her boyfriend, surnamed Xia, it was reported.” (Shanghai Daily)

A suave & far-sighted Dashan hits on dancer/choreographer Jin Xing 金星 in 1991, a full 5 years before her sex change. pic.twitter.com/RBBUgSjg75

Mandarin is like classical music while Cantonese is like rap music, in your face, dynamic and brash http://t.co/nRKVH7SB6D

“The kimchi war between South Korea and China is getting extra spicy.” (Quartz)

“Report: 4 of 5 countries most hooked on VPNs are in Asia.” (Tech in Asia)

“’Communist’ China summed up in one bumper sticker,” via China Hope Live: 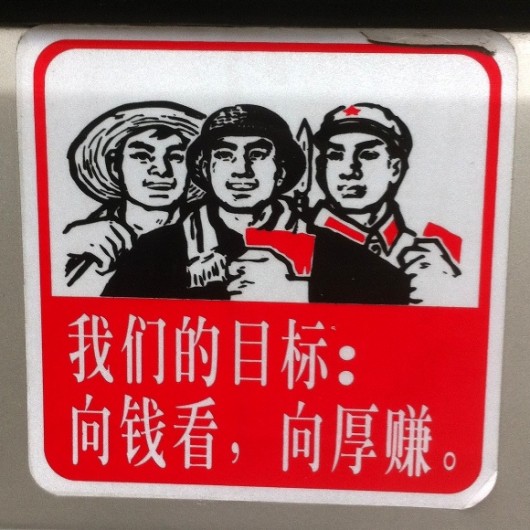