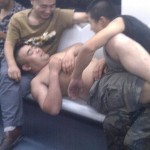 Should any of us experience this type of blithe, unadulterated joy while riding the subway, we should count ourselves lucky — or insane to have finally unyoked from the shells of prejudice and misunderstanding that trammel the great grand human social experience. May the world be as happy a place as depicted here, sans worry,... Read more » 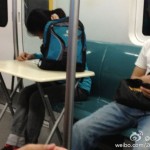 It’s unclear when this picture was taken, but it appeared on 王浩然vic‘s Weibo yesterday. Netizens have expressed bemusement. Why this young lady needs a desk to read is a question I’ll not answer here. Instead, I’ll point you to Helen Gao’s recent article in The Atlantic about gaokao. One feels compelled to rip the desk away, tell... Read more » 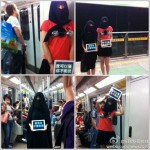 But what is sexual harassment, really? Does leering count? How about intense leering? How about penetrative leering? What about sniffing? Impassioned sniffing? And while we’re on the subject… aggressive winking: yay or nay? Here’s what Shanghai Metro’s official Sina Weibo account, which posted the above picture last Wednesday, had to say about this (as translated... Read more » 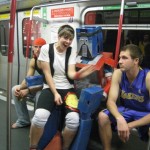 Image via here. In a story about ejaculation — featuring a heavy dose of it as the centerpiece, anyway — China Daily chose to go with the non-descriptive headline “Molesting suspect held by police,” not sure why. (I know why.) The story: The woman passenger, who was wearing denim shorts, said she suddenly felt something... Read more » 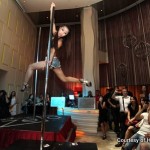 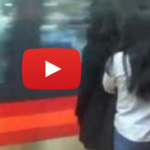 Sure, it's uncomfortable at times, especially around Guomao at rush hour. But it could be worse. 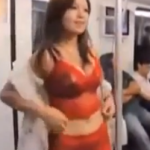 UPDATE: The above video was appended on 3/18. It features Ayo Technology and Don’t Cha. The Chinese Pole Dancing Championship is about to start (apparently), and the woman in the video after the jump (it’s there because it auto-plays) is sixty-something [correction: born in the 1960s] Shi Xiaohong (according to title). All we know for... Read more »