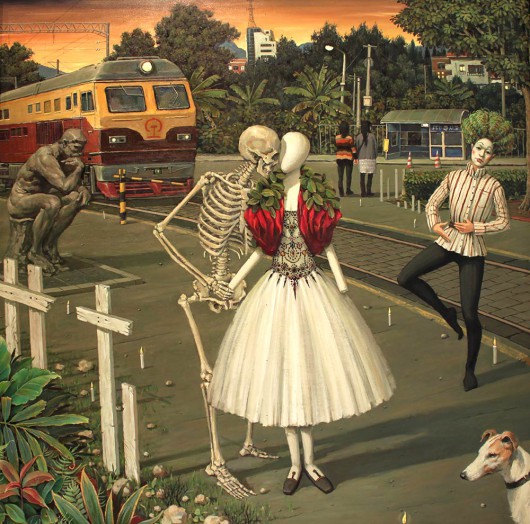 “Artists born in earlier generations often name ancient paintings as their favorites because these survived China’s cultural and social upheavals,” Liu says. “But speaking for myself, my art is inspired by childhood memories, personal experience and the way I see the world.”

Born in Huizhou, a humid costal city of Guangdong province, Liu spent most of his childhood catching fish and playing in the subtropical forests. Although he never studied art until middle school, his childhood experiences significantly shaped his artistic language.

In Drama, his ongoing series, Liu depicts a clown swimming in a lush broad-leaved forest. Created using different shades of green, the image gives a strong sense of freshness and freedom.

“I’m a nostalgic person, and many of my works are related to my experiences. My childhood environment lets me appreciate sea life. The freedom of marine fish is what I long for the most,” Liu says.

That nostalgia can also be found in Big Cat and His Toy, a 2013 painting. In the picture, Liu presents himself as a boy with a cat face who sits in front of a fish-shaped boat. Although the imagery appears surreal at first glance, closer examination conveys as sense of loneliness and isolation.

It’s nothing new for young artists to feel confused and anxious while groping for truth in society, but Liu does an impeccable job of translating this collective uncertainty into his own artistic language. His personal emotions shine through in each work.

In Sorrows (above), Liu depicts a love triangle between a skeleton, a mannequin and a clown. The clown’s face is so vivid that viewers can feel his disappointment and the pain of losing his lover. By contrast, Happiness shows a sweet mood in which a girl dances to the rhythm of a drum-headed musician. Although there are many weird elements in these works, Liu’s warm tones make the pictures unexpectedly reasonable.

That atmosphere has continued in Liu’s work since graduation. Since finishing his studies at the Central Academy of Fine Arts in 2013, his paintings have grown ever more anxious.

In Playing with Fires in 2014, Liu captures a scene of five cigarettes surrounding a burning bonfire in a quiet park. The anthropomorphized cigarettes have a curving appearance that leaves the viewer space to imagine.

“When I painted that picture, I had just graduated from school and was confused about the future. Then I started to smoke and thought the nicotine would help kill the pain. I was like a boy playing with fire to escape from the adult world,” he says.

As with many young artists, the pain Liu expresses through his work is a necessary step for growing up. But as an artist who regards art as an ideal, the only thing he can do is hang on and wait for change in a seemingly static state, just like the plants in his pictures.

“I appreciate the growing process of plants. They develop in a static state, which seems a bit like my personality,” Liu says.

“It’s hard to make a living as a young and unknown artist. But I still find satisfaction and pleasure every time I finish a new work. Staying optimistic and sticking to our dreams is essential.” 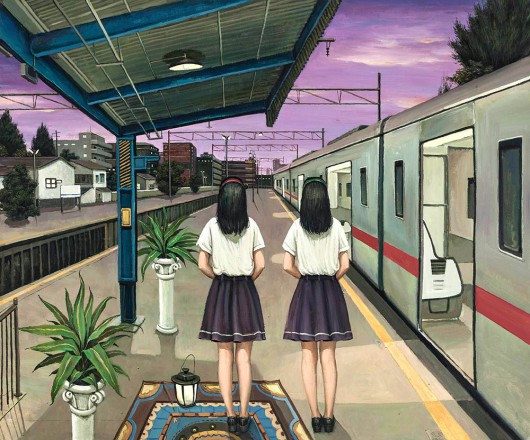 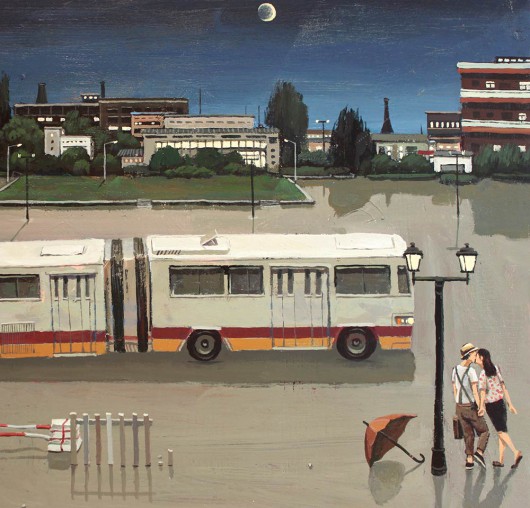 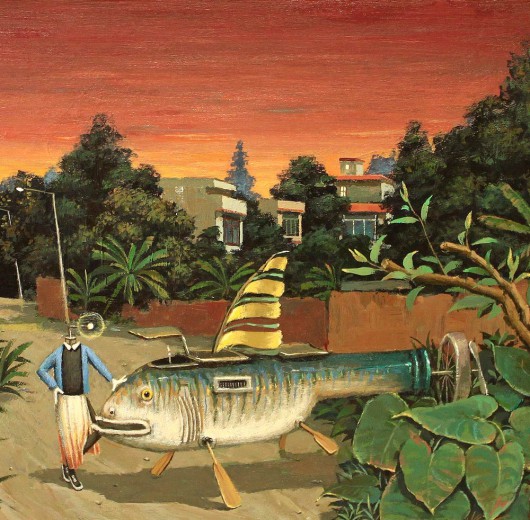