Ed’s note: Portrait of a Beijinger is an original video series for the Anthill by Tom Fearon and Abel Blanco. Each month, Tom and Abel will profile an ordinary Beijinger with an extraordinary story. The first episode in the series, along with Tom’s description of meeting its protagonist Liu Xinran, is republished with permission from the Anthill. 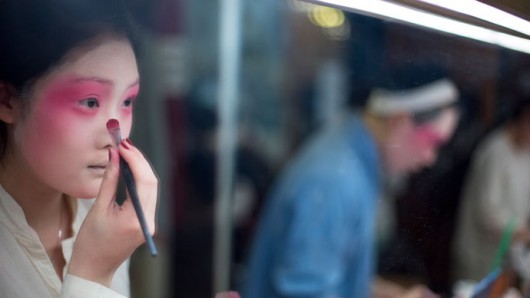 Liu Xinran has a face many Chinese women would envy. High cheekbones, smooth skin and a narrow chin give him a coveted guazilian or “melon-seed face”. He introduces himself in a voice much softer than the one that will fill the Zhengyici Peking Opera Theatre in a few hours time.

“Did you find your way here OK?” he asks.

“No problem at all,” I reply, shaking his manicured hand.

We step into the 300 year old theatre. It is empty except for a couple of janitors whose vacuum cleaner drowns an erhu (Chinese fiddle) strummed by a young woman in glasses by the side of the stage.

Dressed in a knitted pullover, grey trousers and cloth shoes, Liu struts around stage waving a wand-like prop and warming up his vocal chords. He stares into the camera as if confronting an intruder on stage, his eyes as piercing as his voice. Each delicate step is timed to the downbeat of the erhu. A passionate argument of falsetto versus fiddle ensues, begging for an opera gong to weigh in and restore calm.

Peking opera has the shortest history of the hundreds of Chinese opera styles, but remains the most influential. The curtain fell on it during the Cultural Revolution when it was denounced as bourgeois, but curious tourists, nostalgic locals and state-run drama academies are providing a modern encore for a national treasure.

Liu, 38, is a rarity. Unlike many of the performers in his troupe who were trained as children, he took up the craft after quitting his job as a publicity clerk for the Beijing Meteorological Bureau in 2010. His parents protested, but his destiny had been sealed four years earlier when he won the top prize at the Beijing Amateur Peking Opera Competition.

He also stands out as one of only around a dozen active nandan performers in Beijing – men who portray female characters in Peking opera. I ask if he is inspired by the most famous nandan, Mei Lanfang, whose black-and-white portrait eyes us solemnly from the back of the theatre. But Liu says his mantra on stage is innovation, not imitation; copying Mei will lead to the “death of my artistic life”.

After the interview we head backstage. An old man irons sequined loose-sleeved costumes as the cast trickles in. There are no makeup artists or hair stylists; all preening is done by performers themselves. Eyes locked on their rapidly transforming reflections, they chat excitedly about plans for the upcoming Spring Festival.

An announcement prohibiting photography during the show is made as the audience settles into cushioned wooden chairs, but we are told it doesn’t apply to us. Apparently, we aren’t alone. Smartphone shutter noises click between cracking sunflower seeds throughout the show, but the performers aren’t fazed. Having their photos beamed on WeChat feeds might draw new faces the next night.

Later, Liu shows me his other passion: his beverage can collection. We walk down a narrow concrete corridor stained with cellphone numbers towards his eighth-floor apartment. A thick haze lingers overhead and firework debris dances below. Liu’s home is tidy, with a framed calligraphy scroll in the living room and an impressive collection of scotch and other expensive liquors. But he explains his year-round drink of choice is hot water, to protect his voice.

The cans are all in mint condition. It is a collector’s (and trash peddler’s) heaven. Sorted by age and location, each can contains a memory of a certain place or performance. Liu picks out a dozen of his favourites and gives them a gentle polish before lining them on a table in the living room for our slow dolly pan.

Before parting, Abel and I offer him a token of our appreciation – a nice bottle of Spanish olive oil and some TimTam chocolate biscuits from Australia. Mementos from our respective countries, to add to his collection. 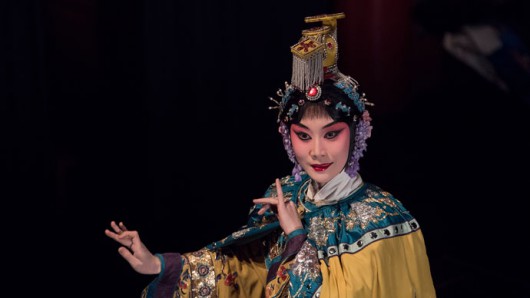 Text, interviewing and subtitles are by Tom Fearon; cinematography and photos are by Abel Blanco.

Tom Fearon is a writer and editor who has lived in China since 2009. He worked in Chinese state media for many years, and previously as a print journalist in Cambodia and Australia. He now works in communications at an international school. You can read his poems for the Anthill here.

Abel Blanco is a videographer based in Beijing who formerly worked in broadcast media in Spain. You can see some of his other short films here.

Next month’s video is about a deli owner in Changping with a military relic museum in the basement. To recommend a person to be profiled in the series, please contact Tom.

This post originally appeared on the Anthill, where there are more photos of the performers.