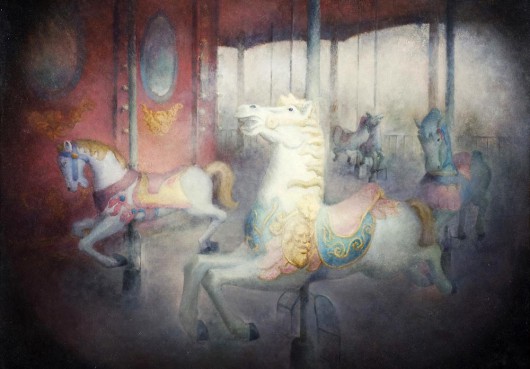 For most people, amusement parks are associated with happiness and fun. But the lonely amusement parks Huang creates are hard to connect with such uplifting concepts. Even when a lone figure appears it is just a shot of his back. Carousels dominate his pictures – so much so that many viewers mistake his work for mere paintings of the rides.

Huang’s technique is primarily inspired by childhood regret. “Although most children have some memory of visiting an amusement park, for some reason I was never able to go,” Huang said. “Even though I can go any time I want today, the feeling is totally different from what a child would experience.”

He compares his choice of subjects to Michael Jackson’s decision to build a large, private amusement park when he became rich.

In preparation for the series, Huang listened to the song “Xuan Mu” by Faye Wang. “I was inspired. The lyrics are about a carousel. I think it fits my creation – the topic of fleeting time.”

Huang said the painting “So Close, So Far Away” (below) best captures his personal regret over lost experiences. He painted it after a sad meeting up with two former classmates. 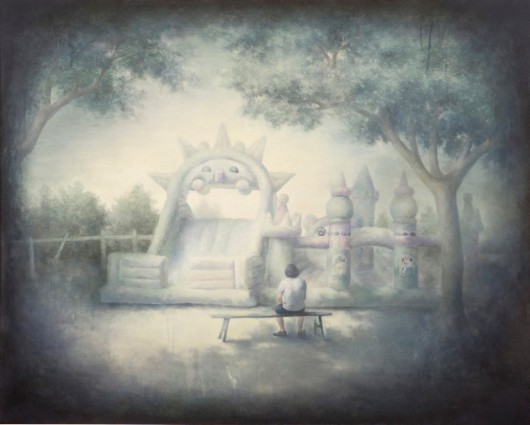 “We hadn’t spoken in a long time – since graduation really – but when we got together we didn’t have much to say,” he said. When the three passed by an inflatable amusement park, Huang felt their awkward atmosphere was in sharp contrast to that of the happy children playing inside.

“The seated man is my portrait,” Huang said, pointing at the picture. “Silent and lonely, I’m waiting for my friends to come. Sadly, they may never arrive.” 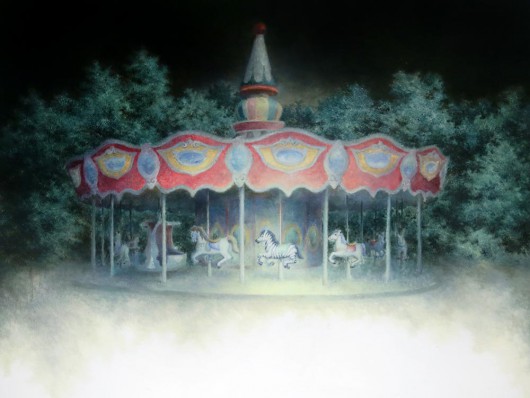