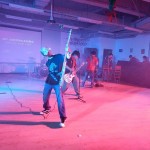 It's even more horrifyingly racist than you might imagine.